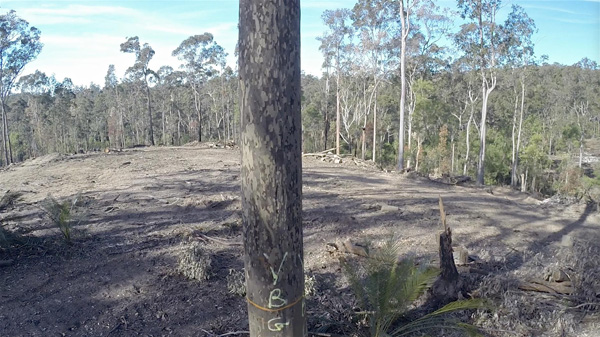 Logging public native forests is increasingly costing us the things we love, but a different future is possible.

Back in June the community of Mogo received a rude shock. Forestry Corporation undertook intensive logging operations close to the township, to the dismay of residents who value the natural beauty and tranquillity of their part of the coast. Following a spotlighting trip in early July, community members saw greater gliders and heard yellow-bellied and sugar gliders in Mogo State Forest. This led to locals collecting signatures and phone numbers for a petition, and Coastwatchers organising public meetings to discuss logging impacts and alternatives to be held in Moruya and Batemans Bay in August.

The glider findings sum up the problem with logging neatly: lots of Australian wildlife, found no-where else on earth, relies on these forests for survival. But modern logging operations remove most of the trees over large areas in a single go. This is why logging impacts have been identified by the Threatened Species Scientific Committee* as key threats to greater gliders: the large gaps created impede the movement of gliders, and the loss of hollow-bearing trees remove nesting and breeding hollows, further restricting the area available to the species. These impacts are starkly highlighted by the image below, taken in Mogo: a yellow-bellied glider feed tree is identified and spared from logging, but is left standing in a sea of destruction (the forest behind the camera is closer, but still heavily fragmented). You don’t need ecological expertise to understand that this is absurd: what self-respecting glider will risk crossing such a treacherous no-man’s land? The negative impacts of logging are not confined to gliders either. Any species that requires tree hollows (e.g. glossy black cockatoos); prefers mature forest ecosystems (e.g. koalas) or intact understories (e.g. pygmy possums) is threatened by logging.

You might ask why, with so many national parks, are our forest species unable to cope with logging? It’s a good question, but the answer is deceptively simple: loggers and wildlife like the same forests. A forest that produces good timber is also likely to support more wildlife because it’s likely to be on more fertile soils and therefore be more productive. This is a key issue, because although we have magnificent national parks, the more productive (and therefore wildlife-rich) forests tend not to be well protected. Logging is not the only threat to forest wildlife—urban expansion is also chipping away at highly diverse forests, and climate change is influencing species’ distributions—but logging is easier to deal with because State forests are in public ownership, meaning we could stop tomorrow with political will.

As we saw on the ABC a few weeks ago, the NSW Government’s plans are not to better protect forests and forest species in response to ongoing wildlife declines, but to relax the requirements to conduct surveys for wildlife. This is a real tragedy, because logging is not the optimal use of this valuable public property: it loses lots of money and now supports very few jobs (a 2015 estimate put the number directly employed by native forest logging in NSW as just 600)**. And all to turn precious forests into woodchips for export. Alternatively we could choose to protect forests, thereby protecting wildlife, water supplies and carbon stores, and implement a just transition of workers to plantation-based forestry or to the National Parks and Wildlife Service.

The latter choice would see the peace and tranquillity of our coastal lifestyles preserved, the benefits forests provide to people protected and future generations given the best possible chance to experience the wonders of the Australian environment.

** Campbell and McKeon 2015: Money doesn’t grow on trees: the financial and economic losses of native forestry in NSW. http://www.nature.org.au/media/213736/160320-money-doesnt-grow-on-trees-nsw-forestry-final.pdf