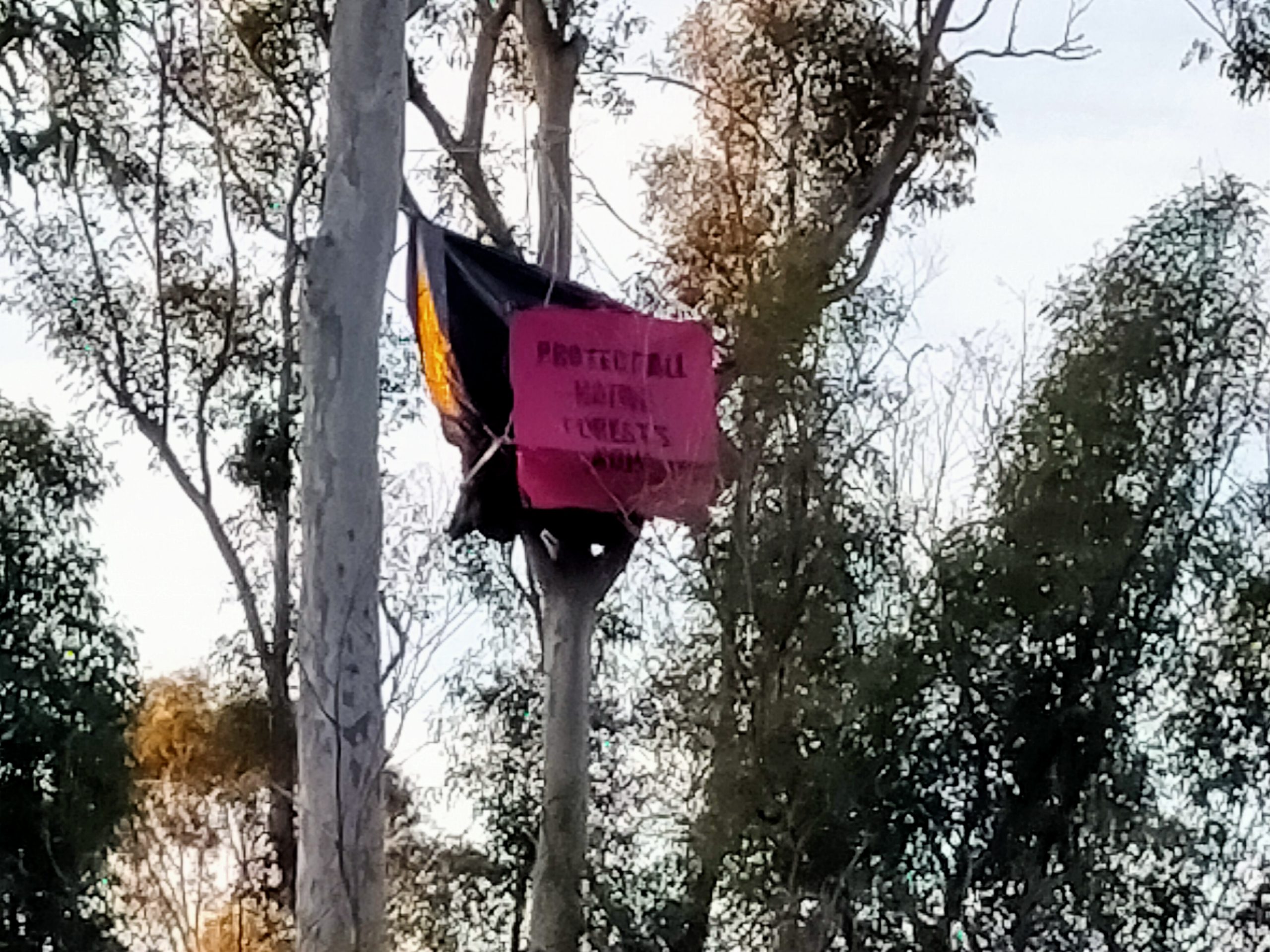 Community Outrage over Logging at Mogo

Logging was halted last Monday in Mogo State Forest by a group of brave individuals taking action on an issue close to their hearts: the protection of our forests and the wildlife that inhabit them. When Forestry Corporation contractors arrived to start work at 6.30am they found a brave activist perched on a tree top platform, 25 metres above the ground. The platform was suspended from ropes that were connected to machinery.

The action was made in response to industrial logging of South Coast forests despite Environmental Protection Authority (EPA) regulations enacted to protect forests and wildlife after the devastating bushfires.

In 2020, only two months after the devastating Black Summer bushfires when over 80 per cent of South Coast forests were burnt, Forestry was ready to recommence logging. The EPA imposed strict post-bushfire conditions for each compartment, which community members who were monitoring found were breached. The EPA acted on the reports with fines and stop work orders issued for Forestry Corp.

Last year, negotiations between the EPA and Forestry broke down after agreement couldn’t be reached on special conditions for logging the next batch of bushfire affected compartments. Forestry then defiantly said it would enforce its own special conditions, however past practices have given the community little faith these will be sufficient to protect wildlife in the area.

Environmental groups see it as a triple failure – the failure of Forestry Corp, contractors and the EPA, leaving it up to unpaid members of the community to monitor the activity and inform the EPA of what they believe to be illegal operations.

"Science shows that logging in burnt forests severely sets back the recovery time for these ecosystems", Sean Burke from South East Regional Conservation Alliance told me. "To be logging in Mogo now is madness and we simply can't let it happen."

Miranda Gibson from Forest Defence NSW was in Mogo Forest supporting the action. “We are taking this action today, to halt the destruction of this important habitat, which is critical for the wildlife that survived the fires” she said. “Many species, including the critically endangered Swift Parrot, are at risk if logging continues in these remaining native forests."

University research has confirmed swift parrot numbers at less than 300 making this habitat even more important to protect. The Mogo Forest is one of only a few areas on the South Coast where swift parrots migrate from Tasmania during winter to feed.

“Locals came to show support for the action as they are outraged at logging of swift parrot habitat following the ferocious fires,” said Joslyn van der Moolen from Friends of the Forest (Mogo). “The EPA fined Forestry $33,000 only two months ago for failing to put in environmental measures to protect swift parrots in Mogo State Forest."

It is no wonder that locals are concerned about ongoing logging activity and Forestry Corporation’s lack of willingness to do the right thing. The self-imposed conditions far exceed environmental best practice and allow free range felling to all but eight habitat trees and five nectar trees per hectare in the harvest plan.

For perspective, compartment 180A in Mogo Forest is an area of 1.7 square kilometres covering 208 hectares of harvestable area. While it looks like the 1664 habitat trees may be able to be ticked off, the same isn’t obvious for the 1040 nectar trees supposedly still standing.

Many suspect that there could be some doubling up of the nectar tree count as was previously permissible under the IFOA (Integrated Forestry Operations Approval) agreement. However in 2019 this doubling up was expressly written out of the legislation so is no longer a valid defence.

Of course these numbers are far from satisfactory in allowing for habitat recovery and protecting against local extinctions. Solitary trees standing tall among low-level slash and forestry litter. Greater gliders needing new superpowers to glide gracefully from one tree-top hotel to the next.

In particular there is concern for the number of ‘H’ and ‘N’ marked trees appearing in the buffer zones around creek areas where logging should not be taking place and where these trees are already protected. Another possible doubling up.

Forestry Corp assure us that trees are clearly marked, and contractors know which trees to fell and which to leave. They also assure us they are fulfilling their obligation to look after the forest habitats they log. It would be feasible to think the forest technicians who actually mark the trees would have access to the same harvest mapping as the community monitors who volunteer their time. Using the app it is easy to see which areas are harvestable and which are protected.

In acknowledging the climate and ecological crisis we now face, any responsible government would declare a moratorium on all habitat and forest clearing – for logging, development, mining and anything else. But instead the environment as usual loses to profit.

Forestry is a heavily subsidised destructive industry. There is no valid or logical reasoning to its continued existence. The jobs your taxpayer dollar subsidises are charged with desecrating carbon absorbing forests and native wildlife, essential ingredients for the future health of a liveable planet for future generations.

While Forestry Corp tells us that we need to keep destroying our native forests for hardwood for the building industry, nothing could be further from the truth. In the past hardwood timbers were relied upon for decking, however in a transformation of the industry, composite plantation timbers are now stronger and cheaper. The truth is that our governments allow logging in native forests, even subsidising it, for woodchip. Let that sink in - species are being driven into extinction for woodchip.

In the compartments where past logging has taken place the forest is left in tatters. The heavy machinery comes in, does its ravaging damage and moves on, leaving a trail of desolation in its tracks. Never rehabilitated, never repaired, it stands silent, no birds in this dilapidated moonscape.

Professor Lindenmayer also believes the fires should be used as a trigger to transition away from native forest logging and wood chipping.

The Environment Protection Authority (EPA) has attempted to regulate Forestry Corporation NSW, given the state of the forests after the bushfires. However, Forestry Corporation have walked away, stating that it would not comply with the rules set up to protect forests. In turn, the EPA have said that they cannot regulate when they have no knowledge of what rules the Forestry Corporation are logging under. As far as Forestry Corp is concerned it is business as usual and the show must go on.

David Ferraro from Canberra Forest Alliance believes it’s time the government stepped up to the plate and took action. “It’s time to put an end to native forest logging for us and our children’s future," he said yesterday.

One of the advocates at the Mogo action was Alison Worthington from Eurobodalla Greens who was there to condemn logging in burnt South Coast forests.

“It demonstrates eye-watering arrogance that FCNSW would act in defiance of both its regulator, the EPA, and the growing community sentiment opposing native forest logging,” she told me. “It is it ecocide to go in and log severely burnt forests.”

Ms Worthington believes strongly in sensible nature-based tourism and forest rehabilitation as the way forward in transitioning forestry jobs to more sustainable industries. This is one of the reasons she is running for a seat on Eurobodalla Council in the upcoming local council elections as the lead Greens candidate. “The Mogo Adventure Trails nature-based tourism initiative will play a key part in the economic recovery of a very hard hit part of our Shire.”

Eurobodalla Shire Council recently received $3 million from the state government, to be co-funded with $750,000, from the Community and Economic Resilience - Growing Local Economies fund. This funding is to be put towards Stage One of the Mogo Adventure Trails Hub.

“It makes no sense to me that while investing in such an innovative infrastructure project we would allow the degradation of a forested area to which we hope to attract large numbers of nature-based tourism visitors,” Ms Worthington said.

“Mountain biking is a great example of an alternative use for our State forests as we exit from logging them, and instead value them as a destination that showcases our natural heritage and attracts visitors.”

Yesterday’s brave actions call awareness to this complicated situation that sees an unnecessary industry wielding its power over the government agency charged to regulate its operations. We can all be grateful to the small group who quietly monitor the operations on our behalf and inform the EPA of when it needs to act. Our forests and wildlife depend on this convoluted web for survival – actually we all do.

The day ended with logging halted for over eight hours in Mogo State Forest. After protestors were asked to move from the site, search and rescue police tensioned off the ropes that were immobilising the machines of Forestry Corp contractors and the tree sitter was left perched in the tree. They are all now home safe, with no arrest made.

If you would like to know more or become involved at a local level, contact any of the conservation groups involved in yesterday’s actions. South East Region Conservation Alliance, Canberra Forest Alliance, Brooman State Forest Conservation Group, Friends of the Forest (Mogo) or Forest Defence NSW.

4 comments on “Community Outrage over Logging at Mogo”