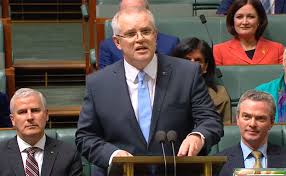 While in Washington, the Prime Minister witnessed President Trump speaking about nationalism, patriotism, the treason of traitors and the irrelevance of international treaties, his latest flag waving endorsement of American sovereignty as the entitlement to do what it likes.

In a Lowy Institute address, Morrison used the same ideas, though he’s been nurturing them for years. He believes in internationalism when it suits. His notions of sovereignty are displayed in king of the castle rhetoric ‘How good is Australia?’, which means hooray for sovereign borders, ridicule of anyone who questions patriotism, enthusiasm for armed force to repel and punish asylum seekers and veiled support for prosecution and police raids on anyone who would expose government wrong doing.

Morrison spoke in the wake of Trump saying, ‘The future does not belong to globalists, the future belongs to patriots.’ The Prime Minister also decried globalists and in a plagiarised version of John Howard’s infamous Tampa statement about deciding who comes to this country and how, he trumpeted, ‘We will decide our interests and the circumstances in which we seek to pursue them.’

Sovereignty as proud nationalism implies disdain for the rights and needs of other peoples and for the planet. It emphasises one nation going alone irrespective of international obligations. To echo Trump’s derision of the United Nations, Morrison said there was no higher authority than the people of Australia who elected him. This sounds like an unexceptional platitude, but it’s used to rally those who feed on suspicions about the loyalty of people who don’t think like them and who could therefore be enemies.

The ‘We are great’, ‘We need enemies’ is the dangerous brew on which populists thrive.

In a reference to the UK Conservative party’s war-like language about the EU and towards anyone who opposes Brexit, the London Observer journalist Nick Cohen comments, ‘The default position of its (Conservative) politicians and journalists is to rouse the rabble by depicting parliament, the judiciary and the civil service as sinister forces conspiring against their country.’

Morrison said he was defending ordinary people against ‘elite opinion and attitudes which have become disconnected from the mainstream of their societies.’

In Australia at the same time as Morrison’s Lowy speech, the UN High Commissioner for Human Rights, Michelle Bachelet reminded the Prime Minister that Australia had ratified most core international treaties each of which had been regularly reviewed by human rights bodies.

In the Pearls & Irritations journal, in response to Morrison’s disdain for treaty obligations unless they suit Australia’s interests, former Australian Ambassador John McCarthy advised the Prime Minister, ‘We do have to cooperate with each other -all the more in a globalized world. That is why we have treaties…You can’t insist on what you like and reject what you don’t like.’

A nationalist version of sovereignty is outmoded and dangerous. A planet is burning, ice caps are melting and precious species are becoming extinct. The arms industry grows but nuclear disarmament is far distant. A neo-liberal economic system fosters social and economic inequalities and in policy circles, justice to reflect respect for universal human rights is treated as a do-good option which can’t be afforded.

Sovereignty could be defined in an inspiring manner, to represent inclusiveness, to encourage humane governance by nation states and to support multilateralism.

The visionaries who crafted the UN and the EU knew the benefits of multilateralism and the need for imaginative, respectful dialogue between nations.

A cosmopolitan view of sovereignty would reawaken visions of the interdependence of peoples, and concern for other’s interests. In domestic policies such unselfishness is called ‘the gift relationship’, as in commitments to strangers without expectation of reward.

In international relations, the gift relationship would cover dialogue across countries to support international treaties and to remind societies and governments of the meaning of civilisation. That suggests a duty of hospitality from which everyone would benefit. It says, whatever you want for yourself, you should be willing to give to others.

There are significant precedents for this way of thinking.

In 2000, political leaders participated in a Millennium Summit to consider the role of the UN at the turn of the 21st century. They concluded, ‘We recognise that in addition to our separate responsibilities to our individual societies, we have a collective responsibility to uphold principles of human dignity, equality and equity at the global level.’

In his seminal work, Reimagining the Future, former Professor of International Relations at La Trobe University, Joseph Camilleri advocated the promotion of democracy by ensuring much greater equality in people’s access to knowledge and influence.

In articles and books on Humane Governance, the international jurist, political scientist Professor Richard Falk identified the healing qualities of non-violence and of respect for universal human rights.

Before Professor Falk wrote those words, the former playwright and President of Czechoslovakia Vaclav Havel called for the United Nations to become ‘the platform of joint solidarity-based decision making by the whole of human kind as to how best to organise our stay on this planet.’
This different version of sovereignty stresses enthusiasm for interdependence, a vision which artists, composers and poets described long before alarm about global warming. When crafting his view of sovereignty Scott Morrison missed an opportunity to derive inspiration from artists of any kind. Many poets, for example, speak of civility, tolerance and interdependence, no sign of enemies.

In the 16th century English poet John Donne, ‘No man is an island entire of itself; every man is a piece of the continent a part of the main….’
In the early 20th century, the Indian philosopher, poet and Nobel Prize recipient Rabindranath Tagore, spoke of ‘One identity of the universe, a proud harmony of all races’

When writing about the Human Family, the North American poet Maya Angelou reflected,

If it’s difficult for an Australian Prime Minister to use foreign poets to envision a conflict resolving view of sovereignty, he could return to Australian Indigenous poet Oodgeroo Nunucaal. In “All One Race”, she advised,

Oodgeroo’s love and inclusiveness heralded a view of sovereignty so different from the crass, polarising views of Scott Morrison. ■
(Stuart Rees, OAM is Professor Emeritus @ the University of Sydney and inaugural recipient of the Jerusalem (Al Quds) Peace Prize.)