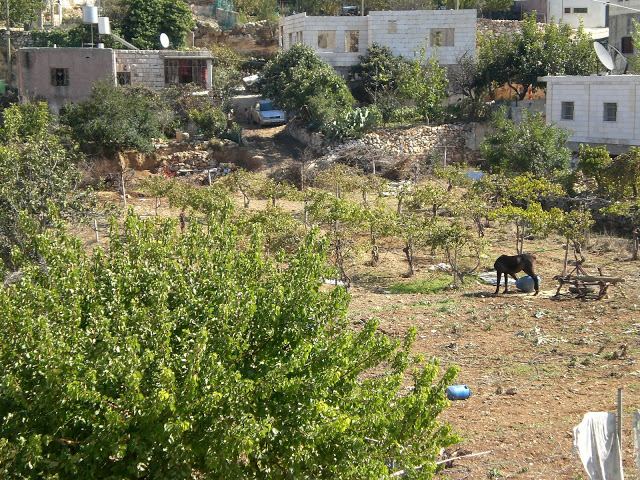 Olives for Peace - Harvesting under Occupation

There are more than ten million olive trees in the West Bank, Palestine. The annual olive harvest which takes place between September and November is highly significant for Palestinian communities, both economically and culturally.

Up to 100,000 Palestinian families currently depend on the olive harvest for their income. Olive trees take years to fruit, meaning that much work and effort has gone into getting trees to harvest – which is both an economic and cultural investment – olive groves are tended by families throughout generations. The harvest also carries powerful spiritual and symbolic significance, associated with notions of peace, resilience, connection with culture and land.

But the olive harvest, like every other aspect of Palestinian life in the West Bank, is carried out under a military occupation that has lasted for 53 years.  An occupation which continues to profoundly and negatively impact the lives, livelihoods, and human rights of the Palestinian people.

To ensure the security of settlers, Israel restricts the freedom of movement of the Palestinian population in the West Bank through over 700 checkpoints and obstacles such as barred gateways, concrete walls and ditches.

It is not possible for Palestinian farmers to take care of their olive trees all year round due to restrictions from the Israeli authorities on Palestinian farmers accessing their olive groves, which leads to a significant drop in yield taking a significant toll on a community. Around 11,000 Palestinians need special permits to live in their own homes in the seam zone (the area between the Separation Barrier on one side and the internationally recognized borders of the West Bank, called the ‘Green Line’, on the other side) and to be able to access the rest of the West Bank through checkpoints. This is because the Separation Barrier is not built along the borders but rather cuts deep into Palestinian territory, meaning that many families are cut off from their agricultural lands stuck in the ‘Seam Zone’.

Over the years, Palestinian access to land and olive groves in the Seam Zone has been significantly reduced by the Israeli authorities. In 2019 of 74 agricultural checkpoints that farmers have to cross to reach their trees, only 53 were open during harvest time. In addition, in autumn 2019, access to land in the Seam Zone for olive growers with valid permits was further reduced to 40 days per year.

The United Nations Office for the Coordination of Humanitarian Affairs (UNOCHA) reports that despite regulations to contain the Covid-19 pandemic that also apply to settlers, attacks by settlers against Palestinians and their property continue.

Between January and the end of May 2020, at least 63 Palestinians, including 13 children, were injured in 143 attacks. Around 3,700 trees were destroyed and over 100 vehicles were damaged. In 2019, settlers committed 341 attacks on Palestinians and their property. 8,000 olive trees, the yield of which is an important source of income in the Palestinian territories, were destroyed by settlers.

During the 2019 olive harvest, UNOCHA recorded 60 attacks by settlers on Palestinians and their property. Ten people were injured, including two children. About 2,700 trees were damaged and 160 tons of olives were lost.

In the past the UN High Commissioner for Human Rights, coordinated the deployment of a protective presence – involving Israeli and foreign volunteers - to support Palestinian families during the olive harvest across 90 locations in the West Bank. This year, due to the COVID-19 pandemic, there isn’t a similar protective presence. Similarly, other protective presence initiatives including Ecumenical Accompaniment Program in Palestine and Israel (EAPPI), have not been able to safely deploy accompaniers.

On 7 April 2020 the Israeli authorities announced that they would not destroy any inhabited Palestinian homes during the pandemic and would generally minimize the implementation of demolition orders. However, according to UNOCHA, 389 Palestinian buildings were destroyed between March and August 2020 leaving 442 Palestinians homeless.

Earlier, on 26 March 2020 material was confiscated in Khirbet Ibziq that was supposed to be used to build a makeshift clinic and several emergency shelters for those affected by the COVID-19 pandemic.

In times of common fragility, where the world has been impacted by the COVID-19 pandemic, and in the context of the ongoing occupation of the Palestinian territories, can we find forms of creative solidarity as a sign of hope and a contribution to the journey of a just peace in Palestine and Israel? Many of the world’s problems seem so intractable that it’s hard to think of ways even to take steps toward mitigating them. But you can make a difference.

One thing you can do is to write to your Federal member of Parliament pressing for a just peace in Palestine and Israel and calling for an end to Israeli occupation. Have conversations with friends and family – people who know you well and trust your word; and speak out publicly about the need to protect the rights and dignity of all those living under military occupation in Palestine.

We can buy Palestinian goods and support those Israeli agencies calling for an end to the occupation. B’Tselem, the Israeli Information Centre for Human Rights in the Occupied Territories, support agencies Act for Peace and the Australian Palestinian Advocacy Network. Both these agencies advocate for humanitarian practices and support long term development projects that help communities to tackle their own problems.

Noam Chomsky sums it up perfectly – if we believe, there is hope, and with hope, anything is possible. The choice is always ours.

In 2019 Kerry Sawtell visited Palestine and Israel as a volunteer with Act for Peace. She spent three months living in Hebron and Jerusalem – areas known for their ancient olive trees which still bloom with resilience.