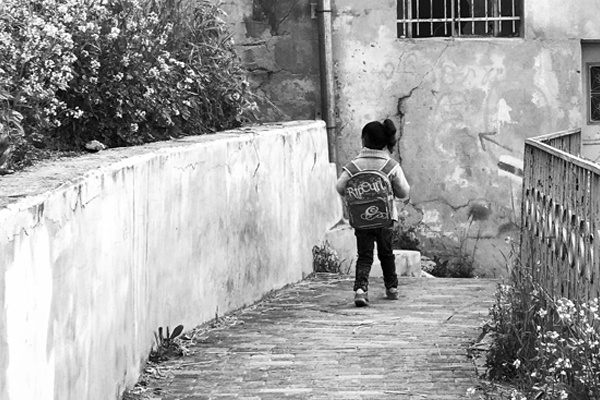 Palestine – through her eyes

Samira lives in Hebron in the West Bank of Palestine. Every weekday morning is the same. Samira walks to Cordoba School going through Checkpoint 55. She walks down a road divided by a cement and wire barrier. The barrier is in place to keep Palestinians off the road which is now reserved for settlers.

Settlers who, under international law, should not be establishing colonies in the occupied West Bank. They turned up years ago, rented a Hebron hotel and barricaded themselves in the hotel. They never left. Now more settlers have come and settlements like Kiryat Arba have been built, or Palestinian homes have been taken over by settlers, all of which is in violation of international humanitarian law (Article 49 of the Fourth Geneva Convention). There are about 800 settlers living in Hebron, protected by 2,000 Israeli soldiers and security personnel – almost 3:1.

The road Samira walks was once open to both Palestinians and Israelis. Now, the sealed part is just for Israelis and the track is for Palestinians. A track that is muddy and slippery in winter, festering in summer. Where settlers throw their rubbish and it piles up because there is no rubbish collection for Palestinians in an area occupied by settlers.

Sometimes Samira has to open her school bag so that the soldiers can check that she’s not carrying any weapons. Sometimes she stands at the checkpoint waiting for the gate to open, calling out asking the soldier to open the gate even though there is no reason for it to be closed. Sometimes she has to walk quickly hoping to avoid settlers who yell and spit at her. Sometimes she has to run because the soldiers are firing tear gas at her neighbours. It stings her eyes and makes it hard for her to breathe. Sometimes she just wishes she could avoid school because when she goes to school she has to repeat the same steps but in reverse and her experience is then repeated. Her teachers walk the same route and they have to show their identification. Identification that they show to the same soldier twice every school day – once going to school and once leaving the school. The soldier calls them by name, because he knows them but even so, the teachers are made to wait, made to show their identification documents.

Samira’s uncle’s home has a Star of David painted on his front door. The settlers put it there marking their intention to take the home and occupy it. Her uncle won’t leave though. He says this is where he was born, where his father was born and where his grandfather was born. They must stay and look after Palestine because no one else will. The world doesn’t seem to be listening or if it is listening it turns a blind eye to Israeli settlers’ continual expansion in the West Bank.

Samira’s school has a wall. It’s been tagged by settlers – ‘Gas the Arabs’. She doesn’t like that. Someone else wrote the Hebrew word for peace, ‘Shalom’, she likes that.

And so every weekday morning is the same. Samira walks to Cordoba School going through Checkpoint 55.

Kerry Sawtell spent 3 months in the West Bank city of Hebron as a volunteer with the Ecumenical Accompaniment Program in Palestine and Israel.