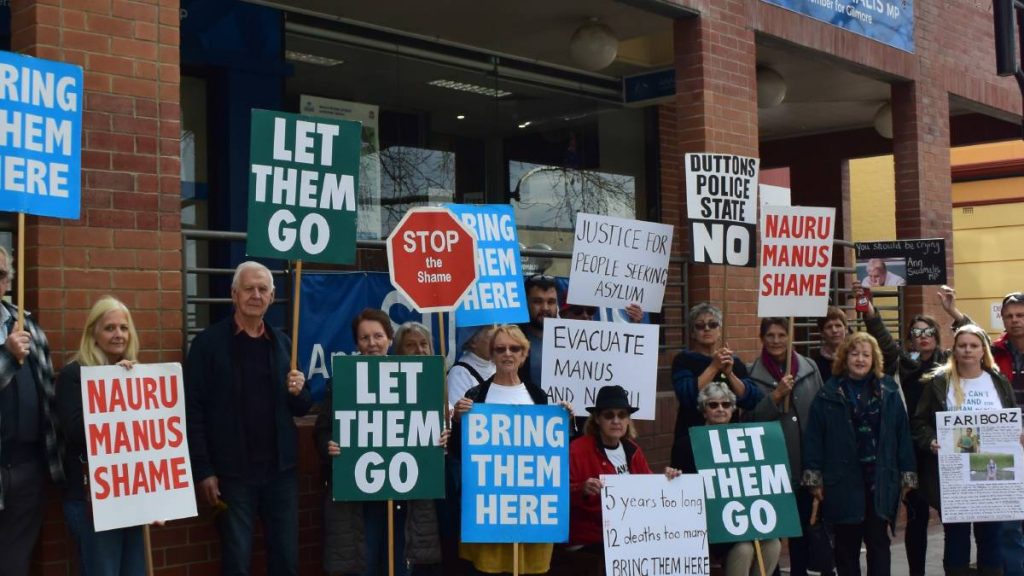 With well over 200 vigils under their belt, Berry’s 'Stop the Shame' group isn’t giving up on supporting refugees and asylum seekers or their efforts to change Australia’s cruel immigration policies.

It was back in October 2016 when members of Amnesty International Berry started a vigil, outside then federal member for Gilmore Anne Sudmalis’ office, in Nowra. Our group maintained the commitment to the Friday weekly vigil and were soon joined by the Uniting Church clergy and members, members of Red Cross, human rights advocates and other concerned citizens. In that time, we have collected over 3,000 signatures to our petitions, an indication of the humanitarian concerns of our community.

We are members of the excellent group, RAR (Rural Australians for Refugees) and have made connections with many other like-minded groups such as the ASRC (Asylum Seeker Resource Centre) and refugee action groups in the Illawarra and Eurobodalla.

The refugees we have been specifically campaigning for have been imprisoned in Australia's cruel offshore detention centres, Manus and Nauru since 2013. During this time their human rights, set out in the United Nations Convention on Refugees, have been obliterated. The many cruelties perpetrated are written about in Behrooz Bouchani’s award-winning novel "No Friend but the Mountain", and viewed in his film Chauka, both of these brilliantly and painstakingly created on a smuggled mobile phone. There are still 140 refugees left in dismal conditions in Port Moresby, their lives once again in danger.

As our government has broken international laws pertaining to refugees with its treatment of those in offshore detention, we the people, need to work for their right to have their asylum seeker status claims processed onshore. The humane option to take up the New Zealand offer was rejected by the government. The reason: Because after three years of residency they would be able to come to Australia. Do you really think they would want to come here now after being treated so cruelly by successive governments?

One would ask our government, having spent more than $13 billion on unlawfully keeping the refugees out of our country, to what end? According to Julian Burnside, AO, QC, the Border Force has sent back many boats already. Our country needs hardworking, resilient people, especially in small country towns. Consider how the Biloela community fought for the rights of the Tamil refugee family in their community.

How much better could those billions have been spent on our areas of need such as social housing, free childcare, hospitals and better living conditions for Australia’s other great shame - our treatment of our First Nations people. Instead, we have a government that chooses to lock up innocent asylum seekers, far away and out of sight. How $13 billion of our taxpayer money can be wasted, while our homeless, disability sector and the vulnerable, have to fight for their fair share of government funding is nothing short of a national disgrace.

We are currently supporting the men held in miserable conditions in Port Moresby to buy food and other essentials. Stop the Shame Berry have set up an account at NAB Berry. You can get details by emailing the group stoptheshameau@gmail.com.

The Friday vigils are currently on hold until Covid social distancing risks have eased. You can keep in touch with the group via their Facebook page.

4 comments on “Stop the Shame.”