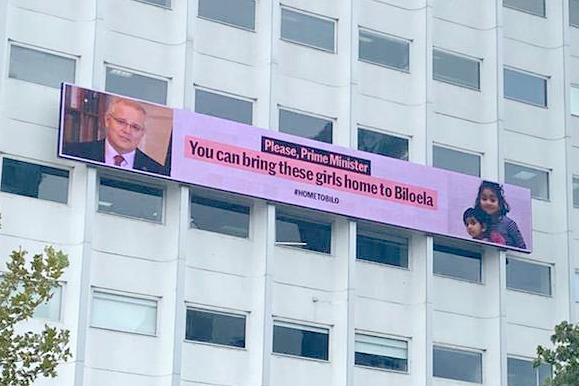 Continued detention of the Tamil Biloela family, let alone the threat to deport them, confirms the government’s fascination with cruelty as policy.

To demonstrate their bravery in defending Australia’s borders, Ministers claim to have an obligation to protect comfortable and fortunate Australians, but they show a wanton disregard for the lives of the powerless and vulnerable.

Displayed on a daily basis, the cruelty beggars belief. As with any serious disease, diagnosis should be made and explanations given about the persistence of such a poisonous disorder.

Government politicians, bureaucrats and the law are culpable. So too the opposition if, with Christina Keneally and the Greens as worthy exceptions, it stays lukewarm in demanding the family be returned to their friends in Biloela.

Marise Payne and Karen Andrew’s cowardly muttering about options to possibly send the family to the US or New Zealand is the latest sadism operated by a government which spends a fortune to detain the family on Christmas Island.

Let’s not play with words. You can’t claim respect for human rights, mateship, Pentecostal fervour for the underdog, let alone a semblance of Sermon on the Mount principles and then collude in the apparent denial of immediate hospital treatment for a serious ill child. Three-year-old Tharnicaa was not flown the six hours to a Perth hospital until she was considered dangerously ill. Cruelty beggars belief.

The Department of Home Affairs bureaucracy contributes to the disease. We might not blame individuals shuffling papers in a Canberra office, though the supposed strong man Secretary Pezzullo sets the cultural norms about fortress Australia, and even likes to pose with warnings about the prospect of war.

Be clear. Throughout history, massive cruelties have depended on the efficient operation of invisible and inaccessible public servants. For the sake of efficiency, the Holocaust death trains needed an army of bureaucrats to ensure that resources were available and everything ran on time. Let’s not mince words. The analogies are apt.

Bullying cruelty to punish the vulnerable leaves no exception to the rule. Yet in almost all social policies, there are exceptions, otherwise a country would be run by robots. Let’s taste a touch of courage in a simple exception for this worthy Tamil family. It only needs a little bit of imagination and a touch of humanity. It beggars belief not to do so.

The Prime Minister speaks with grovelling repetition that in the case of the Tamil family’s appeal to stay in Australia, the law has run its course, all legal avenues have been exhausted. Morrison’s behaviour confirms a one-dimensional abuse of power and uncritical consideration of this phenomenon called ‘the law’, presumably a reference to deliberations of the High Court. Let’s not avoid criticism of establishment interests. Let’s demystify a high and mighty administration of justice. What justice?

Legal deliberations remain a mystery to most citizens, the wisdom of judges almost taken for granted, yet legal decisions are too often made to reflect a government’s policies, otherwise Murdoch media outfits join in supporting Coalition derision of the judiciary.

When one courageous and principled public servant criticised the cruel operations of the Department of Home Affairs, Immigration at the time, (she wrote under a pseudonym as La Legale) the High Court ruled she was in the wrong and could not do so. What price justice?

Let’s be clear. There are numerous rules of international law which forbid cruel and inhuman punishments. May judges of every level recall those humanitarian principles and summon the courage to go home satisfied that they have decided to speak about humanity by allowing exceptions to the rule. In the case of this Tamil family, it beggars belief they would not do so.

The Labor opposition has a chance to speak about justice, not as a piece of opportunism to embarrass the government for its cruelty, but because, post Covid, there is an immediate cultural and policy need to craft non abusive, socially just ways of living together.

Influenced by commitment to universal human rights and to life enhancing uses of power, the long overdue return of the Biloela family would be a first step vaccine to suppress this cruelty pandemic.

It beggars belief that all powerful operatives, in political circles, in bureaucracies and in the highest operations of the law would not take the vaccine themselves and encourage others to do so.