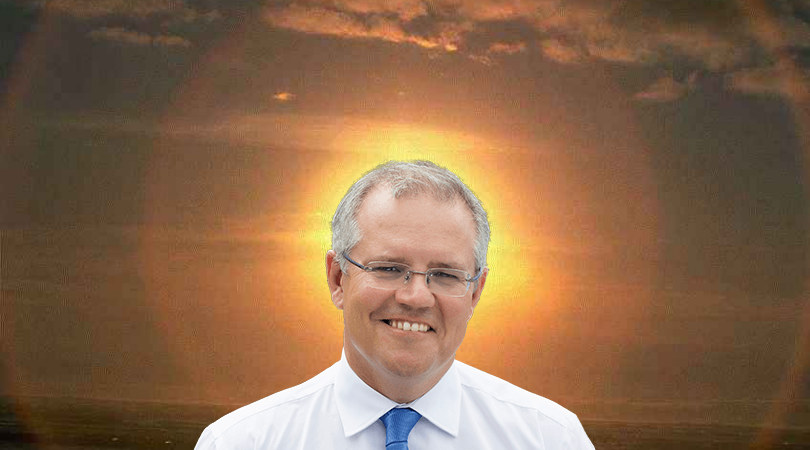 The God-given Right to Discriminate

What are the most pressing concerns in this country at this time? The kind of big ticket issues that our democratically elected public officials should be concerning themselves with? Global pandemics? Climate change? The housing crisis? Drugs? Infrastructure? The clean generation of energy? The military apparatus required to defend ourselves?

Based on the legislation that our government has championed, these pressing concerns (ones that will have an on-going and potentially catastrophic effect on the entire population of this country) rank pretty far down the list. What concerns Scott Morrison and the members of his drop-kick directorate is paving the way to a Christian theocracy.

To be fair, it's not just Morrison's mission to end the (already tenuous) separation of church and state in Australia, it's the mission of a loose coalition of religious groups, private schools, churches, companies and public officials on the arch-conservative far-right of the political spectrum. State-sponsored religion is a cornerstone of any far-right political state. Make no mistake - God wears leather jackboots.

We've seen several examples of our worthless Prime Minister's efforts to nudge Australia further down the road towards a theocratic state, such as his thin-lipped resistance to same sex marriage, his cowled attacks on abortion rights and his substantial financial support for the religious indoctrination of children by means of the school chaplaincy program. But his tent-pole policy, the legislation that he undoubtedly views as central to his woeful legacy - is the Religious Discrimination Bill.

Scott Morrison emerged from hiding during the run-up to the government's lengthy summer holidays, to champion this bill, a piece of legislation that seeks not to outlaw religious discrimination, but to enshrine the right of the religious to discriminate against anyone that does not adhere to the precepts of their faith. This bill, currently in its third draft, has been watered down from its original Gilead-like form, but it remains an utterly pointless example of religious cant designed purely to enshrine the legality of discrimination and, unbelievably, to override any existing federal, state and territory anti-discrimination laws.

This is not a bill about enshrining freedom on the statute books - it is the exact opposite - it is a building block on the road to a state in which religious law takes preference over civil law. It is evident that the far-right and its religious benefactors are playing the long-game here. They knew the bill would not pass in its original form and so they employed one of the oldest tricks in the book - ask for far more than you want and then get bargained down to what you were actually after in the first place. They also know that once this bill is on the statute books it can be built up, layer upon layer, amendment after amendment, in the same way that telecommunications legislation has been painstakingly transformed into state-sanctioned mass surveillance.

Thou shalt have no gods before me

In his speech to the biennial conference of the Australian Christian Churches, Morrison quoted the economist F.A. Hayek, who said, "Freedom has never worked without deeply ingrained moral beliefs." Hayek himself was agnostic and I find it hard to believe he'd be happy about a far-right Pentecostal politician using his words to justify the extension of religious texts into national statutes, but Morrison's message is clear.

There's also the inference that morality is the exclusive reserve of the religious - that an atheist cannot be moral. Well, if the systematic rape of children, the forced conversion of indigenous peoples, the forced removal of their children, the doctrinal abuse of gay people, honour killings, the patriarchy, extremism, terrorism and suppression of scientific progress are the moral-high ground that religion represents, then, ermm, you can keep it thanks mate.

In the same speech Morrison also said, "There is a tendency for people not to see themselves and value themselves in their own right as individuals. And to see themselves only defined by some group and they get lost in that group and you know when you do that you lose your humanity." So - kind of like being a member of a sect-like Christian group then?

He's not the messiah

The bill prohibits discrimination due to a "person’s religious belief or activity in a wide range of areas of public life, including in relation to employment, education, access to premises, goods, services and facilities, and accommodation."

Simultaneously, the bill states, "It is not discrimination for a religious hospital, aged care facility, accommodation provider or disability service provider to seek to preserve a religious ethos amongst its staff by making faith-based decisions in relation to employment. Such conduct is therefore not unlawful." These steps are apparently required in order to "avoid injury to the religious susceptibilities of people of that religion." Avoid injury? Since when was being offended by something an injury?

The bill also seeks to enshrine in law the right to make "statements of belief". As long as the statement the person made did not "incite hatred or violence" they are off the hook. So for instance, "Wives, submit to your husbands" is cool but "Hang the gays" is not. This is a watered down version of the so-called Folau Clause which sought to enshrine in law the right of fine upstanding Christians such as Israel Folau to make statements such as "hell awaits" for "drunks, homosexuals, adulterers, liars, fornicators, thieves, atheists, idolators," without losing their jobs.

Religious belief is, thank a god, falling year on year and yet the religious continue to have an out-sized influence on the political system and consequently on the legislation passed by government. The Stone Age beliefs and doctrines of people like Scott Morrison are their own business only up to the exact point at which they have an impact on the lives of people who live happily free of religion.

Scott is free to believe in whatever cosmic space fairy he likes. He is free to get up to whatever bat-shit insane nonsense he likes on his own time and to do so with similarly bat-shit insane members of society. His freedom to do this has never been under threat and yet this legislation's existence is predicated on the lie that it is.

It is based on the lie that Christian 'values' are somehow threatened, whereas the truth is that society has matured to the point at which ordinary people now recognise how backwards religious doctrines are, how stupid and illogical they are and how dangerous they are. It is for this reason alone that the number of the faithful shrinks year-on-year, not because their cult is being undermined by slack laws.

The Religious Discrimination Bill is a pointless piece of legislation championed by the most pointless prime minister in recorded history. The fact that Morrison deems this toilet-paper of a bill worthy of the time and consideration of our elected public officials, at a time of such upheaval and turbulence, speaks volumes to his self-serving and self-interested nature.

Never mind about the pandemic Scott, don't worry about our slowly roasting planet, forget about the economy, pollution, crumbling infrastructure, our education system, healthcare, the growing issue of domestic violence or, you know, gun-toting white Christian terrorists - you just make sure the nice Christian lady in the cake shop can tell that disgusting gay couple to fuck off and make their own wedding cake. Job done, champion. Well done.