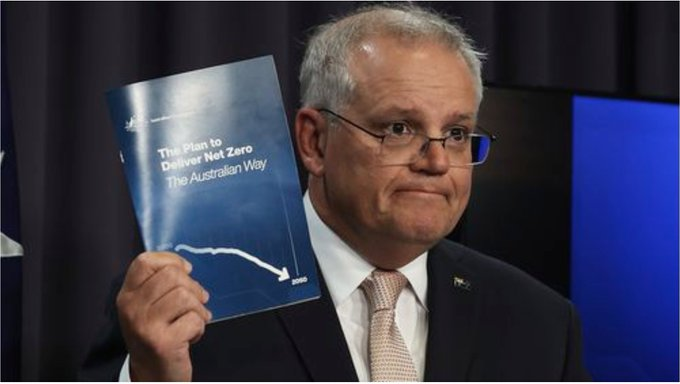 Morrison’s ‘Can Do Capitalism’: An Outdated, Selfish Narrative

Prime Minister Scott Morrison has been promoting ‘can do capitalism’, when what Australia needs is policies that treat all citizens equally.

Returning from Glasgow with the ‘colossal fossil’ award for Australia’s performance on climate action, the prime minister has been in election mode. Preoccupied with self-promotion, he searches for photo opportunities and repeats an outdated neoliberal, competition-for-ever way of thinking.

The challenges are extreme. They include survival of the planet, protection of democracy plus the need for a reinvigorated promotion of human rights.

Transition to a clean energy economy is perhaps the easiest response to the threats of climate change. Crafting ways of living centred around human liberation not economics will be more difficult to explain let alone achieve. That challenge faces all political parties and should not be shirked by resort to advertising gimmicks.

In developing countries, the capitalist narrative is so embedded as to be taken for granted. Most politicians say it is the way we have been, the way we will be. There is a glaringly obvious alternative though in an election campaign, to imply easy promotion of that alternative would be as foolish as Morrison offering more of the same.

In every social and economic transition, from the Black Death to a left-over life for survivors, from wars to post-war reconstruction, nothing happened overnight. So too with the need to plan societies that address pandemics and climate change, re-define human security, community solidarity, the means of income and the meaning of work.

Meeting those needs will require risks, human creativity and adaptation coupled to life enhancing policies concerning health, education, housing and community. That should be a story of equality among citizens in which the dynamics associated with conversations about change will pose other questions and answers. Those are necessary and exciting possibilities.

Market forces have contributed nothing to policies to deal with the consequences of the Covid pandemics but they have been a catalyst for massive social inequalities, for the growing wealth of top percentage citizens and for the marginalisation of people who are poor, marginally employed, can’t purchase a home, can’t find rentals or are homeless.

In so many countries, the growth, development, consumption of the neoliberal mode has destroyed social cohesion, made work inaccessible, towns uninhabitable, and air unbreathable. In response to these crises, reliance on market forces produces ‘can do capitalism’, hence the need to redefine the very concept of an economic system.

A quick glimpse at how people respond to crises when their world is crushed and day to day choices are of life or death, shows that priorities for human survival contain visions of futures which cannot be repeats of the past. As with community initiatives in response to the Australian bush fire destruction, the current thousands without homes in flood destroyed British Columbia will be participating, cooperating, creating a sense of solidarity and belonging. Those responses to a crisis show the hallmarks of post-capitalism challenges to build sustainable, socially just futures.

In a short analysis, I’ll oversimplify. The policy options depend on selfishness or altruism, direct and indirect violence or non-violence.

Mining fossil fuels, a violence to planet earth, is on the Glasgow agenda to be abolished, yet to sustain that industry, billions are paid in secret subsidies to mining companies. If those fuels are burned, they will warm the atmosphere to a catastrophic degree.

Selfishness in education policies is camouflaged by claims about the value of choice associated with massive subsidies to a private school system, even as the official narrative speaks of equal opportunities for all.

Similar seduction and deceit about choice affects a health care system which requires a twelve billion per year subsidy to prop up a failing private insurance system. Equal access to high standard hospital and dental care must be nurtured by political support for the unselfish gift relationship qualities inherent in universal health insurance, a system which also displays desirable traits of trust in democracy.

Previously in Pearls and Irritations, John Menadue has advocated housing policies to reflect the sort of society we want to be, his vision affected by altruism not by ‘the quest for wealth accumulation’. The language of advocacy needs repetition. An affordable home in a secure, enjoyable neighbourhood is a human right and should not depend only on bargaining power in market transactions.

Other key issues concern the critique made by millions that their work contributes nothing to their own or to others’ wellbeing, and they can’t wait to do something useful with their lives. That search for usefulness confronts questions about the balance between leisure and paid work, between volunteerism and indispensable activities which build family and community. Those are conundrums about the nature of work and income, but they need attention and analysis on another day.

A current priority is to say that a ‘can do capitalist’ state has to cease promoting selfishness and the associated destructive respect for marketisation, privatisation and the interests of finance.

By contrast, health promoting policies for clean energy and air, for public education and transport, require can do, creative ways of thinking and living to build interdependence, solidarity, personal fulfilment and survival.