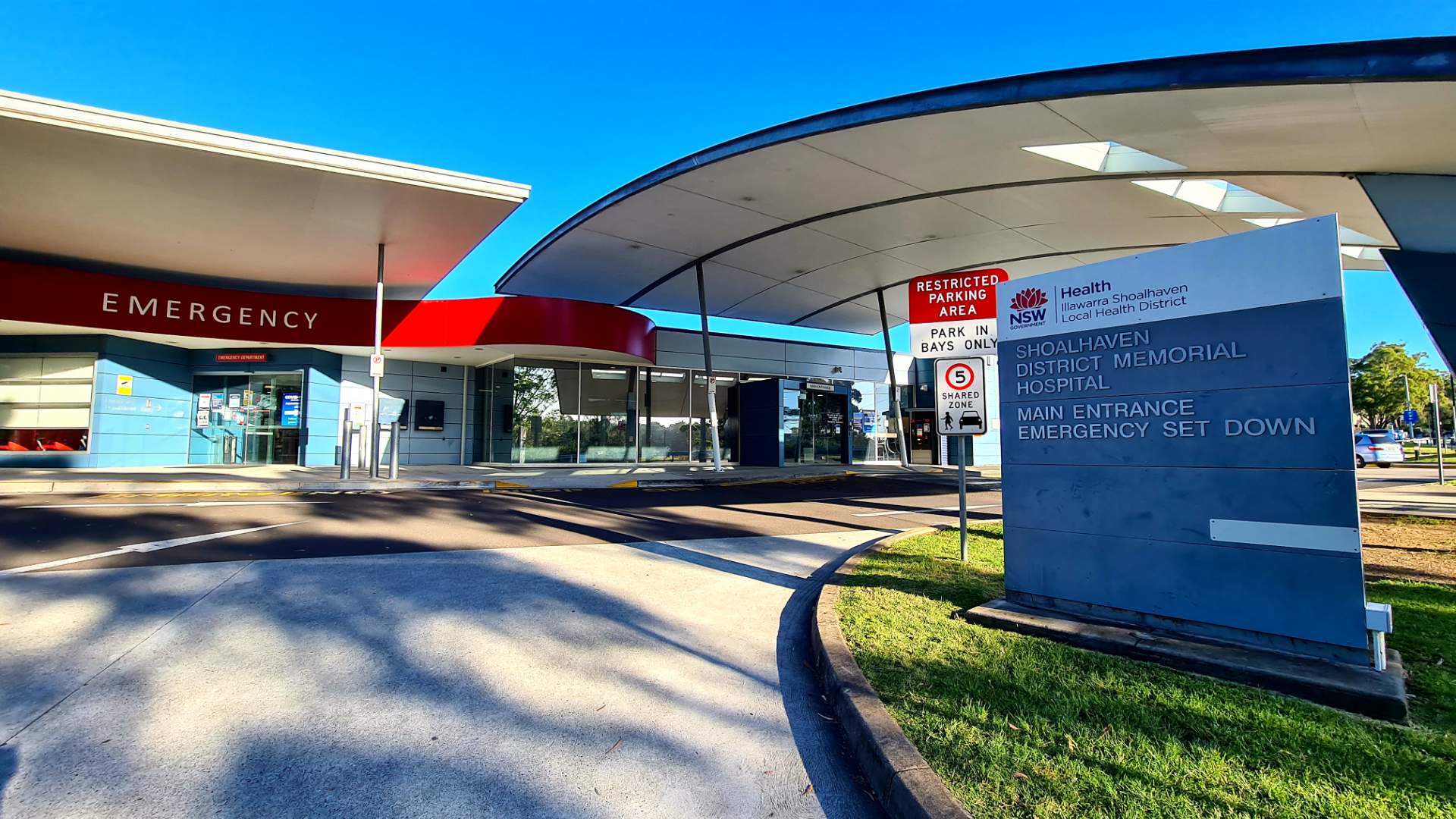 Band-aid solutions provide simple answers to problems, they provide a quick fix without addressing the underlying issue. Got a headache – take a painkiller. Infected cut – apply this antiseptic. Depressed – take these tablets. When it comes to designing health infrastructure, it seems that band-aid solutions are the government’s preferred response.

As the fight continues to bring discussion of a new hospital back to the floor of parliament, health professionals and experts have joined the community to voice a preference for a ‘greenfield’ option. Will the NSW Government finally listen to our voices or will prior decisions made by the politicians prevail?

What is a ‘greenfield’ site? Greenfield land is undeveloped land in a city or rural area either used for agriculture or landscape design or left in its natural state. These areas of land are often agricultural, or properties considered for future urban development.

Shoalhaven District Memorial Hospital was originally built in 1919 and was designed as a small hospital to suit its site. Its location is no longer suitable or large enough to satisfy growth. No one can refute the importance of investing in our health services; equally we cannot deny our region the hospital and services it actually requires.

At a community forum last week, held by the Shoalhaven Hospital Action Group, Illawarra Shoalhaven Local Health District (ISLHD) CEO Margot Mains told attendees that extensions to the current hospital had been in planning for more than a decade and a clinical services plan for the $483 million expansion had now been completed, with initial groundwork set to begin in 2021.

With the cancer care centre, sub-acute mental health unit, car park, emergency department upgrade, endoscopy unit and GP superclinic already established and costing close to $65 million combined, Ms Mains explained the costs involved in relocating these services would be extremely expensive and another reason why ISLHD were planning for the current site.

She stated the hospital expansion would mean more beds, double the surgeries and double the theatres, which is what the Shoalhaven urgently requires. The redevelopment would include a stroke unit, cardiology services with an increased ED input and more outpatient spaces.

Ms Mains pointed to opportunities for community consultation at a later date, however concern arises surrounding the progress timeline and if listening to community members will happen too late to bring a greenfield site back to the table and if their voices will actually be heard.

Shoalhaven councillor and Parkinson’s nurse Nina Digiglio has been instrumental in the fight for a greenfield hospital site since 2018 and has worked alongside medical professionals, state MP’s and large numbers of residents across the region.

Armed with a hard-hitting and factual approach, Clr Digiglio has taken the campaign to both local and state government alongside a growing movement in favour of a new greenfield site, which has led to the recent inception of the Shoalhaven Hospital Action Group, a voice for community and an information sharing resource.

“Talking to my (health professional) colleagues, we agree it is necessary to build a new hospital which will deliver the services we require for 50 years into the future, not 10, and one that is accessible for everyone in the Shoalhaven” said Clr Digiglio.

In favour of a greenfield site, local GP Tim Bailey has called plans to upgrade the current site ignorant of many community issues. Dr Bailey claims that any upgrade will impinge on residential and recreational areas as well as areas of Aboriginal significance. Furthermore, the Shoalhaven is dramatically underfunded compared to other state-wide redevelopments and, for almost the same cost, a new hospital could provide 50 per cent more beds – this is largely due to a new hospital being one level, not multilevel.

Independent State MP Justin Field has joined Dr Bailey in questioning exactly what the plans are. He stated that, since conducting a master planning process back in 2018, Health Infrastructure has made little information available publicly and engaged in little to no community consultation. Field labels any suggestion that work is imminent in the next few months as ridiculous and points out that no money was allocated in last year’s budget for construction and that the architects were only recently appointed.

Additionally, there has been no Development Application or Environmental Impact Statement presented and there are issues with locating the Clinical Services Plan.

Shoalhaven Mayor Amanda Findley believes a new greenfield site would be a far better option for Shoalhaven Hospital rather than expanding the current facility's footprint even further onto Nowra Park and argues that the current hospital precinct could very easily be converted into rooms for visiting medical specialists.

Despite hearing what the upgrade would bring, the redevelopment does not include an orthopaedic ward or fracture clinic, or a cancer ward for those recovering from receiving chemotherapy. There is also no emergency mental health unit, which would take stress off the emergency department.

That some infrastructure has already been constructed is not a legitimate argument for the current hospital upgrade to go ahead. The current buildings in place could be a complimentary hub to the greenfield site, adding more medical services, more opportunities for residents, healthier outcomes and even more jobs.

Traffic congestion along North and Shoalhaven Streets, caused by hospital parking and narrow streets designed for what was once a small town, is a major problem for residents and visitors to the hospital.

The planned relocation of the emergency department entrance back to Shoalhaven Street will either hinder emergency vehicles or force the use of the new privately and foreign owned multi-level carpark which charges visitors and staff to park. Scenic Drive is now closed off, once used frequently by emergency vehicles for a quick entry and exit.

Keeping the hospital on the current site would also see the gradual loss of Nowra Park, and put into doubt the future of a 400 year-old Blackbutt tree. Nowra Park is a green space essential for recreation and health and is also used by St Michael’s Primary School students. The park, the first ever registered recreational park in NSW, is rich in history and has Aboriginal significance. Originally, this land was never meant to be built on, yet, over time, has fallen victim to development. Green spaces in our towns are vital.

Illawarra Shoalhaven Local Health District, along with Health Infrastructure, have reassured local residents that the Blackbutt tree in Nowra Park will not be removed, rather become a focal point. However, residents are concerned for the tree’s health and future if redevelopment were to proceed.

With the NSW Government’s focus continually being on the Illawarra rather than Shoalhaven, we have a one-off golden opportunity to take our health services into the future with a 50-year plan of a new greenfield hospital or else be provided a 10-year patch-up plan of a hospital re-development.

Understandably, the Illawarra has extra focus because of the large population growth within the region, however the Shoalhaven is no stranger to population growth and our population is shifting south and outward toward the coastal villages.

Based on this future growth and projections of population increase, it seems sensible that a new more centralised hospital should be built to serve more of the Shoalhaven and get people to the assistance they require more quickly and efficiently.

A new greenfield hospital would also alleviate the need for patients to be transferred to Wollongong or Sydney which is particularly important with an ageing population.

Too often in the Shoalhaven we see plans for population growth before providing residents and visitors with the adequate infrastructure and services they require, and a new hospital would be an extremely positive step towards overcoming the ‘build now, fix later’ mindset of the current council and state government. This time we could fix now and not have it be a problem later.

When taking into consideration the benefits a new hospital could provide, the cost comparison of doing it right the first time would be $560 million compared to the $434 million pledged for the upgrade. The new hospital could be environmentally sustainable, matching high standards for water and waste management, and is economically sensible planning going into the future.

“The Government has acknowledged that our region's population is booming and set to grow by 12 per cent in the next decade, so why wasn't a larger greenfield hospital option considered to prepare for that future growth and more centrally locate our region's major hospital to the population across the Shoalhaven?” said MP Justin Field.

Across the world, national health care contingency plans have struggled to cope with Covid-19, with facilities and critical care systems collapsing under extraordinary pressures. Hospitals have often had to rely on medical evacuations by regional health agencies, or even the army. In a growing list of countries around the globe this is leading to a complete rethink about how we design our new hospitals.

It’s not too late to have a rethink about ours either.

If you support a new greenfield hospital for Nowra please consider signing the petition here or visiting the Shoalhaven Hospital Action Group on Facebook here.