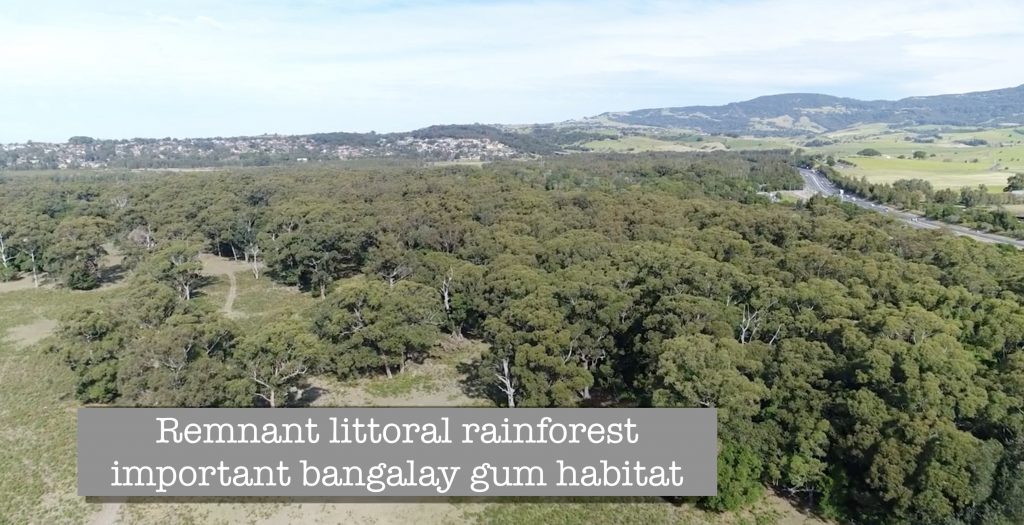 Independent NSW MLC and south coast resident Justin Field has warned that the Dunmore and Minnamurra community will not be deterred following a recommendation by the NSW Planning Department that the Dunmore sand mine expansion “is in the public interest and is approvable, subject to the recommended conditions”.

The proposed expansion of Boral’s Dunmore sand mining operations was referred to the NSW Independent Planning Commission for decision on 22 September with a public meeting set down for 28 October.

The Planning Department’s Assessment Report notes that the project would clear “up to 7.5 hectares (ha) of native vegetation… including 4.5 ha of Bangalay Sand Forest (BSF), which is a listed endangered ecological community (EEC) under the Biodiversity Conservation Act 2016” (px) and provides enough sand for just three to four years of extraction.

Independent NSW MLC Justin Field said the community had supported Boral’s existing operations at Dunmore in the past, but this expansion had gone too far, and they have got the community off-side.

“Sand mining right alongside the Minnamurra River and clearing critically endangered vegetation is totally unacceptable. It’s an environmental risk and will have a negative impact on the amenity of this beautiful area.”

Mr Field has also criticised a leaflet circulated by Boral to local residents about the project which suggested community concerns had been addressed by changes to the proposal. “The proposal has not changed to reduce impacts on the local environment. This leaflet is at best a bit of corporate spin, but at worst just pure propaganda. The company’s response to public submissions clearly states that “As a result of the submissions received, no substantial changes have been necessary for the proposal to address specific comments, requests or concerns”.

“This campaign has brought together everyone who cares about the river including environmentalists, fishers, members of the local communities, and regular visitors but Boral have just rejected community concerns out of hand”.

Almost 5000 signatures were presented in a petition to State Parliament in 2019 following a rally of almost 1000 people who formed a human sign saying ‘NO Boral Sand Mine’ on the Minnamurra headland. Opposition to the mining extension also came from Kiama councillors, the major, deputy mayor, and local environmental and conservation groups.

Kiama Council has expressed concern about dangerous chemicals leeching into the nearby Minnamurra River with the 5A proposal just 150m away from an old tip site, there is the potential to effect the hydrology of the ground water seeing chemicals such as dioxin, pesticides, herbicides and other banned highly toxic chemicals finding their way into the Minnamurra River. All this for an estimated eight months, or less, of sand for concrete.

Prior to the excessively heavy rains this year, the region had been heavily affected by drought, shrinking ground water supplies, drying creeks and lagoons and struggling wetland areas. Drought is far from over in Australia and meteorological data suggests it is the way of the future under our disrupted global climate system. Significant ecosystems such as that around the Minnamurra River banks, dunes and floodway’s must be sustained and protected to avoid local extinctions of precious wildlife.

The second site, 5B, will have a significant effect on native vegetation and animals. Boral claims that the animals, many of which are endangered, can simply move to another place. How does Boral intend to explain this to the wildlife?

Off-set systems are a nice ideology but in practice they don’t work, particularly when threatened or endangered species are involved.

Most of this vegetation is classified as endangered ecological communities and must be left intact to support wildlife recovery. Development and infrastructure are constant threats to the survival of such creatures as the barking owl, the greater glider, and the white bellied sea eagle, just to name a few.

Mr Field said, “The NSW Government should listen to the community and stop this expansion. This has to be the line in the sand for the Dunmore operations. They can’t keep moving closer to the river. They need to look for alternative sand resources if they want to keep mining sand in the region”.

Environmental assessment of the ecology

Howard H Jones, secretary of the Gerroa Environmental Protection Society (GEPS) and former Kiama councillor, has shown an interest in the Boral sand mining activity around the Minnamurra River. Jones’ study of the environmental and cultural heritage of the area has made him speak out on the new proposal and the risks as he sees them are clearly not worth taking.

Jones is concerned about the vegetation in the area adjoining Minnamurra River.

“This vegetation is a complex ecosystem consisting of an assemblage of endangered groundwater dependent and saline wetland communities through to sand-forest and littoral rainforest.” Jones said. “It is virtually a discontinued island of vegetation and its sustainability is vulnerable to fragmentation, habitat loss and water balance changes.”

This vegetation unit is particularly unusual because it mainly consists of communities like swamp forest and rainforest that don’t produce nesting hollows. The area of Bangalay sand forest that will be impacted by this dredge pond contains mature hollow bearing trees so the impact of their removal will disproportionately affect the survival of many animal species.

Jones also believes sand mining activity will impact on coastal wetlands. Studies have shown the mangrove vegetation in the Minnamurra River is migrating westward due to sea level rise and this migration is impacting on endangered salt marsh communities near the proposed dredge pond.

“Planning for wetland migration is essential to protect these communities,” he said, “but the proposal to locate the quarry dredge pond immediately to the west of this wetland vegetation will make this impossible.”

Part of the proposed dredge pond adjoins the Coastal Wetlands and Littoral Rainforests Area buffer identified in the Coastal Management State Environmental Planning Policy. Sand mining activity would be quite outside its objectives – to protect coastal wetlands and littoral rainforests in their natural state, including their biological diversity and ecosystem integrity, and to improve the resilience of coastal wetlands and littoral rainforests to the impacts of climate change, including opportunities for migration.

I contacted Richard Maitland from Friends of Minnamurra River on Tuesday after hearing him on ABC Illawarra’s morning program chatting with Nick Rheinberger. Maitland had been privy to an inspection of the proposed Boral site, and this was the first time he and GEPS had been allowed access. I was interested in hearing more on his perspective after being there.

The site visit had a big impact on Maitland, particularly viewing the significant stands of mature bangalay forest on the 5B site behind Dunmore House, to the south east on the flood plain of the Minnamurra River.

“It is very ecologically significant,” he said, “the trees upon reaching maturity produce nesting hollows for endangered species which are known to live in this habitat.”

When Maitland visited the 5B site the magnitude of the destruction the expansion would leave behind really struck home. Walking through just some of the eight hectares site, and imaging four and a half hectares of mature bangalay trees, the dominant vegetation of the habitat, gone. And a vast body of water residue, all eight hectares of it, where forest once stood.

“To actually visit the site and see first-hand the rich diversity of the bangalay forest and the adjoining coastal littoral rainforest was enlightening,” Maitland said. “Both sites also have evidence of significant aboriginal occupation with many artefacts identified in the surveys completed. Sand mining by its very nature effectively destroys these Aboriginal heritage sites.”

IPC ignores the cultural heritage value of the site

The other issue that needs addressing but isn’t something the IPC typically takes into account, is the cultural heritage of the area. Jones believes that one of the proposed sand quarry dredge ponds adjoins the site of the Minnamurra Massacre identified by Professor Lyndall Ryan from University of Newcastle and acknowledged by Kiama Council on its bicentenary in 2018.

Howard Jones says cultural heritage cannot be ignored and must somehow be made part of the evaluation process. “The place of the massacre should be considered a sensitive historical site which should be of value to both Non-Aboriginal and Aboriginal people due to the revelation of this massacre as an early Frontier War site.”

Learning this, Boral will hopefully look into it very carefully and be cognisant of bad community sentiment should they proceed without a full investigation of the massacre site issue.

This is significant for all Australians because our ancestors were involved in that massacre 200 years ago and the Wadi Wadi land owned by those massacred was officially handed to the people who exonerated the perpetrators a few years after the event. So, this is of monumental importance in Australia’s history and the massacre site should be treated as seriously as any other historical war site.

We need to rebut the comfortable denial of the Frontier Wars and work for the recognition of our history. Australia was, we must not forget, conquered by a foreign people who dispossessed the owners of their land in a war that ended 65,000 years of cultural continuity. That can’t really be said of any other war Australia has been involved in, so we must take on the responsibility of acknowledging that truth in history and wear the shame they brought upon us.

For the community and those who care for the area, its history and environment, this isn’t over. Anyone concerned about this inappropriate project should register to speak at the public meeting on 28 October and can make a submission to the planning commission.

More information on the Minnamurra sand mine proposal can be found in Riachard Maitland's article for The New Bush Telegraph "Sand mining at Minnamurra - a contentious environmental issue" via this link newbushtelegraph.org.au/?p=1504