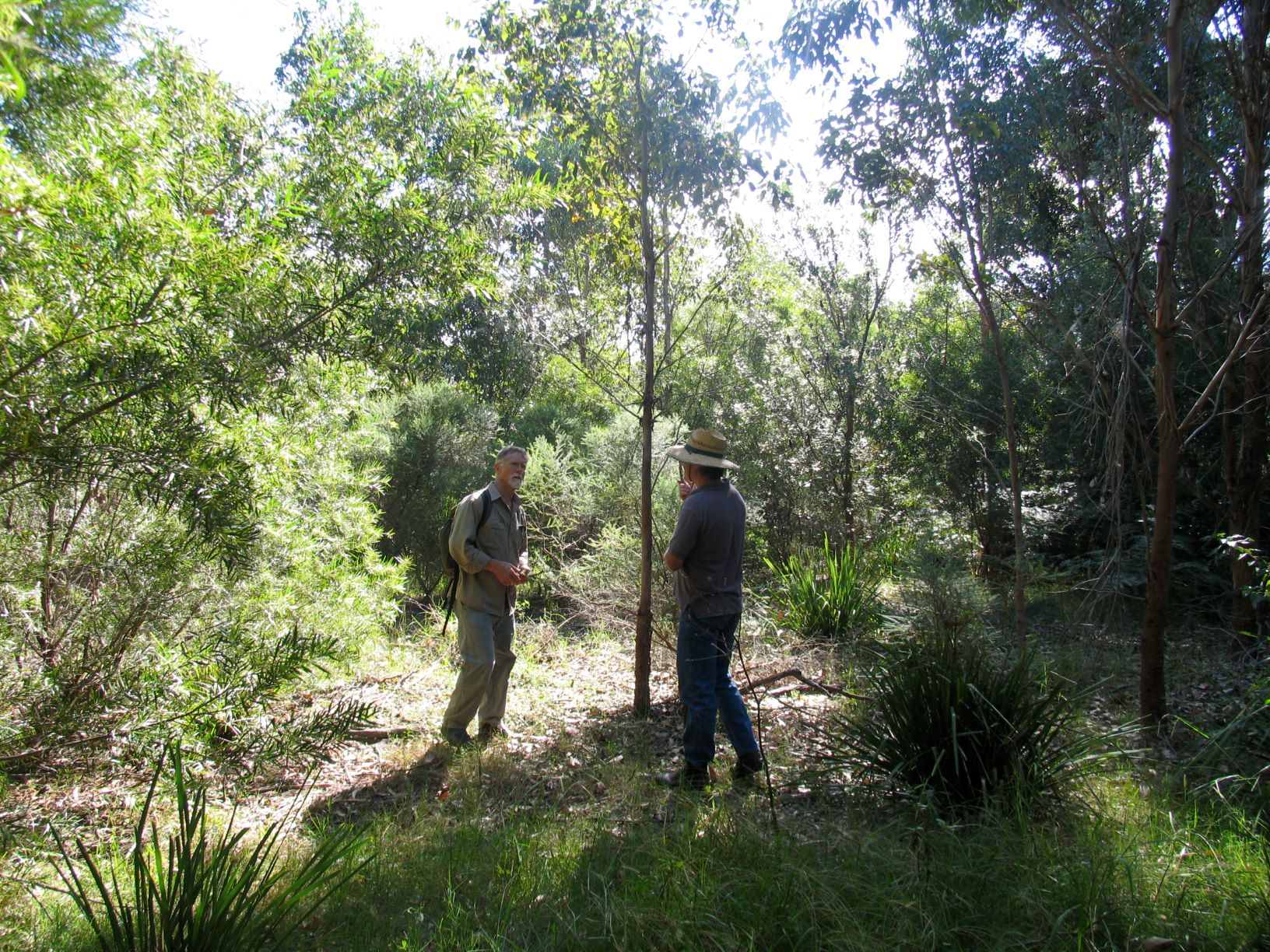 Stories of Destruction and Regeneration at Seven Mile Beach

This is a tale of two stories. The first tells of a small environment group’s fight to stop environmental destruction by a sand mining company at Seven Mile Beach near Gerroa. It is a war story covering thirty-five years and with no end in sight. The other is the resurrection story about the regeneration of the land destroyed by this company during that war. Both are remarkable stories of community determination and resilience.

Story one starts with the clearing of Baileys Island in the mid-eighties. This bushland adjoins Crooked River and Blue Angle Creek at Gerroa.

The vegetation on Baileys Island was remarkable. An assemblage of at least five Endangered Ecological Communities (EECs), it encompassed the only intact coastal zonation of vegetation in our area. The ecology ranged from freshwater wetlands through swamp forests, bangalay sand forest and littoral rainforest to coastal banksia and acacia vegetation.

The picture of GEPS president Warren Holder taken recently in front of one of the great rainforest figs that survived the carnage gives some idea of the lost grandeur of that place.

In 1986 the mining company bulldozers moved in and began clearing. Resident Les Robinson alerted us to the dreadful event unfolding. His picture appeared holding onto a tree stump protesting the destruction on the front page of the Illawarra Mercury. This picture was used as ‘evidence’ when the company prosecuted him for trespass. That was the year our small environment group formed.

Altogether about 50 hectares were cleared over three years, prior to the lodgement of a sand mine application and Environmental Impact Statement a few years later. The mining company never was prosecuted for this environmental destruction.

Kiama Council environmental policies at the time were weak and there was no will to protect this highly significant vegetation. In response to this inaction the Kiama community engaged in a political campaign and two environmental activists were elected to Council.

In the early 90s our Society joined with the new ‘Green Council’ to successfully oppose this sand mine application in the Land and Environment Court where the application was disallowed. The damage however had already been done.

Many more battles lay ahead. The company began an ‘unauthorised’ mine in highly sensitive wetland vegetation nearby, claiming they had ‘existing use rights’. Council took the to court, and this time they were required to rehabilitate the site. More damage had been done.

In the late nineties they applied to mine a nearby area of highly sensitive Swamp Mahogany Forest EEC. This time Minister Refshauge disallowed the application.  This was the first and only time we didn’t feel that we were battling the government as well as the mining company.

In 2008, supported by the EDO, our group took Minister Sartor, the Department of Planning and the mining company to the Land and Environment Court in our second Court appeal after they approved a Part 3a application to extend the existing sand mine into sensitive Bangalay and Blackbutt forests further south at Gerroa.

The Court upheld our appeal, the judge finding the environmental responses by the Department to be inadequate. However he didn’t stop the mine. Instead he offset the losses with concessions that included larger conservation areas to protect the EECs adjoining the mine site and considerably larger areas of plantings.

So this really was only a technical win and critical habitat for the greater glider was lost and the vegetation further fragmented.

A new Part 3A modification for a sand mine extension is before the Department of Planning at this moment. It is a less damaging proposal mostly in adjoining farmland, maybe a win in itself, but this application still has the potential to fragment remaining habitats, destroy around 100 trees and impact adjoining groundwater-dependent ecosystems.

This never-ending fight has spanned over 30 years for our environment group. It could be said we won many environmental concessions, stopped mining in some sensitive areas and overturned an indifferent Council, enabling us to contribute to a range of environmental policies and reforms.

However this sand mining company has cleared approximately 80 hectares of mostly Endangered Ecological Communities, fragmented bushland and diminished the Seven Mile Beach vegetation and habitat in the process. With the support of successive state governments, the environmental impact at Seven Mile Beach has been immense.

The Resurrection of Baileys Island

Story two is about the resurrection of Baileys Island. I think this story is important, not just because of the outcome but also because it shows that determined and caring communities can achieve a lot.

In the mid 90s when Sydney Water was looking for a location for a new Sewerage Treatment Plant (STP) for Gerroa and Gerringong they faced a lot of community resistance.

Our environmental group was initially opposed to the Baileys Island’s location at Gerroa, which the sand mining company had recently cleared. The site was highly sensitive, surrounded by Blue Angle Creek and Crooked River, and adjacent to groundwater-dependent ecosystems and wetlands that we were concerned the effluent from the STP might further impact.

However, we also assumed the mining company would make further applications to mine this now degraded site and were keen to get it into public ownership. There were signs of natural regeneration and we glimpsed an opportunity to regain community control and repair the area.

Dave Johnson, dubbed ‘Mr Sewerage’, was GEPS community representative on the STP community liaison group. He played a big role in convincing Sydney Water to build a quality STP that treated effluent to a high tertiary standard and recycle the wastewater.

Finally, with community support, the Baileys Island site came into public ownership. The STP got the go-ahead and we gained the opportunity to rehabilitate a large area of Baileys Island.

With Terry Barratt managing our Landcare project we negotiated with Sydney Water to access watering infrastructure and recycled water from the STP and accessed $120,000 in grants.

When revisiting the site to document its progress in 2008 we were encouraged to see our plantings thriving and the native vegetation regenerating.

With a lot of community volunteer support we planted 20,000 trees and fenced the area to promote natural revegetation. The pictures tell the rest of the story. They show that twenty years on Baileys Island is beginning its journey to return to a new near-natural state.

The plantings have attempted to replicate the original plant communities. These current images from 2021 show the project’s progress 20 years on of Swamp Oak, Bangalay, Blackbutt and Swamp Mahogany communities that once covered Baileys Island. The trees are now 20 metres or higher with lots of natural regrowth visible.

Although the vegetation is now returning to Baileys Island, this sandmining saga has been a tragedy for the ecology of Seven Mile Beach. Too many of our precious local ecosystems are disappearing and recoveries are slow and uncertain. The progress made by this small group of passionate nature lovers is testimony that people can make a difference.