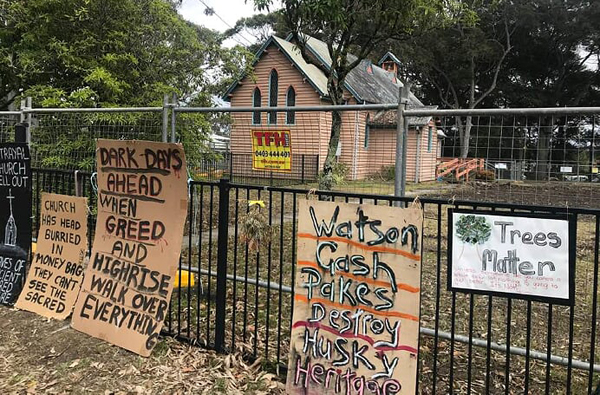 Update on the fortunes of the Huskisson Holy Trinity church site

Well you can be wrong. We all thought that developer Stephen Bartlett would abide by the constraints of his DA that allowed the demolition of the old church hall and the movement of the Blacket church across the block to make way for a conference centre/hotel along Hawke Street. None of this pleased many people, but at least the DA stipulated that vegetation would not be destroyed in the process and soil disturbance would not occur on areas where no radar work had been carried out to establish where graves are located. So, we thought we knew what was going to happen. The hall was duly demolished.

Then on 18th and 19th September a number of beautiful mature trees were cut down on the site. Hang on – wasn’t this specifically disallowed under the conditions of the DA? But, said Bartlett, the DA didn’t matter, because in the Shoalhaven (and not in other places) any tree that is closer than its own height from a building is not protected by Council’s controls (Vegetation SEPP). This is known as the ‘45 degree’ rule. Any owner can just cut down these trees, without a by-your-leave to anyone. No register of slain trees is kept, so across the Shoalhaven we don’t know how many disappear, but in Huskisson where the chain saws frequently disturb the peace and the footprint of larger buildings requires the removal of trees, the urban canopy is in retreat. New trees do get planted, but the difference between a new tree and an old growth one is stark, and the canopy of old trees on the old church site is unique.

A lot of people who witnessed the trees coming down, and heard their screams, said that they wished they hadn’t been there. Several people said that they had nightmares, part because of the trees, part because of the shock of it happening at all when it was not expected. Before it happened, Council staff had told us that the developer needed a new DA (i.e. permission) to fell these trees, and so we were unprepared.

Not so the next time the chain saws came a couple of weeks later. On Wednesday morning on the 2nd October, Evan Christen, a normally law-abiding citizen, climbed into one of the two trees that the local Aboriginal people say stand on the site where their ancestor James Golding, known as King Budd Billy 11, King of Jervis Bay, is buried. A small crowd stood below, ignoring police urgings to move away. Then several Indigenous men arrived and pleaded with the tree removalists to stop. They did, and a fair amount of the tree remains. For now. Just one post on the Huskisson Heritage facebook page netted the society the amount of Evan’s fine four times over, as people expressed their outrage over this destruction.

And get this. When or if the church is moved, its new position will permit the owner, the Anglican church, through their developer of choice, Huskisson hotelier Steve Bartlett, to cut down more trees. People often make suggestions for possible uses for this deconsecrated church. Perhaps the best use would be to put it on wheels and hire it out to anyone who would like to cut down trees, free from investigation or consultation with anyone.

Ordinary mortals have difficulty understanding how this can happen when the land has not been rezoned from its current zoning for religious use, and when there is no DA approved to do anything major on the site.

Two things you should know. Firstly, the other week the Shoalhaven Council reaffirmed its support for the 45-degree rule, in the face of a letter from the State Planning Minister saying that he thought it was a bit rich and needed to be reconsidered. Cr. Patricia White, never seen at the site before, came on the day Evan was arrested, to give an interview for local TV, just to say how much she supported this terrible ‘45 degree’ rule. The second thing is that, at the time of writing, the Council has before it a Planning Proposal to rezone the block to allow buildings 16 meters high – well above the actual height recommended in the Councils own controls. For a comparison, the apartment block opposite the bakery nearby in Curambene Street is 9.8 meters. We will be opposing this monstrous pitch at overdevelopment, all the way.