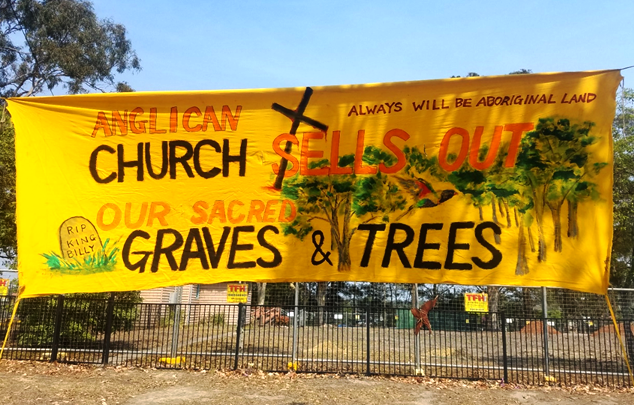 The Holy Trinity Church site is a prime heritage location with its exquisite little Cyril Blackett church, unmarked European and Aboriginal graves and beautiful stands of trees that dominate the canopy of Huskisson. Its location, ambience and complex history tell the story of the place. There is overwhelming community support for keeping the block as the natural ‘village green’ of Huskisson and with ongoing development it should become the town centre. Anywhere else it would be preserved and celebrated.

Everyone loves the space and a lot of people assumed it was common land. It is privately owned by the Anglican Church. For decades attempts to have the site heritage listed have been powerfully resisted by the majority of councillors on the Shoalhaven City Council and by the Anglican church. Development ‘thought bubbles’ for this site have included a hotel, apartments, backpacker accommodation etc. etc.

The church’s chosen developer, Stephen Bartlett, of the Huskisson Hotel, has at times applied to have the church demolished and has cut down trees on the site using the pernicious ‘45 degree rule’ under the cover of a DA that assured everyone that no vegetation would be harmed. He has shown no interest in talking to or listening to the community. People who legally and peacefully protest at the site are harassed by the police.

Anglican officials are also uncommunicative. They say that this land, given to them for free on which they have never paid taxes or rates is theirs. Legally it is. Morally, people are shocked at the cavalier attitude of the Anglican Church to a site where potential destruction of gravesites is deeply distressing to the Indigenous community and where a hotel, gambling etc. etc. will destroy a much loved place.

In late 2019 the Anglican Church Property Trust submitted a Planning Proposal (a PP) to the Shoalhaven Council to rezone the land from a ‘place of public worship’ to ‘mixed use business’ with height allowances to 16 metres. This exceeds heights permitted under current planning instruments and is far taller than any other buildings in Huskisson. The apartment building opposite the Husky bakery, for example, is 9.8 metres.

The SCC had to decide whether to forward this proposal on to the state Department of Planning for what is called ‘gateway determination’ to allow it to proceed.

The developer’s Planning Proposal, authored by PDC Planners, September 2019 lists the possible uses for the site – residential apartments, serviced apartments, hotel, conference facilities, retail – vague enough to fit with anything that the developer would later dream up. This document says that these kinds of developments fit with ‘the future desired character of Huskisson’ (p.19) and that it would create around 70 new jobs. A number plucked from the air. Jobs are good, but some jobs are better than others and hospitality jobs are often insecure, low paid and casual. But this is the simplistic mantra for the development of Huskisson. The community has never been consulted and community suggestions, such as a cultural centre that interpreted the rich settler and Aboriginal history of the site have never been given any consideration, despite a lot of evidence that such places enhance and attract tourists. Other ideas that never got a look in included investigating using it for a university marine studies campus. This kind of land use might not attract so many jobs on site, but good planning requires a more wholistic way of understanding employment potential.

The Council ignored their staff too and submitted the PP to the State Planning authorities for approval. The NSW Department of Planning responded by requiring the Shoalhaven City Council to undertake a raft of additional studies, investigations and reviews. Everything the State requires had already been asked for by the Huskisson Heritage Association, by the Jerrinja Land Council and by the Council’s own professional staff. In these Covid-19 days when the state government is fast tracking developments everywhere, its refusal to just rubber stamp the rezoning is a rebuke to the Shoalhaven Council majority.

The State planners insist on an independent ground penetrating radar survey to properly establish the presence and location of graves. Dr Evan Christen, a member of the Huskisson Heritage Association, a soil scientist with almost 200 scientific papers published in his name told the Council that the ground penetrating radar work undertaken by the developer was shonky. Everyone did. The Council majority in their wisdom label this kind of expert input as ‘amateur’ and ignore it.

So what happens next?

All this will take a lot of time. In the meantime, a DA remains in place that allows the church’s chosen developer, Mr. Stephen Bartlett, to move the church across the block. Given the requirements of the State for investigation of the location of gravesites over the whole site, it should be a given that any movement of the church will not now happen prior to this investigation, but who knows?

Even before the PP was determined the developer put in a variation to this DA indicating that he wanted to move the church to a location hard up against the boundary of the adjoining Jerrinja land. In April 2020 in an official statement of the Jerrinja Land Council, its CEO, Alfred Wellington said that ‘the prominence of this location with regard to our land is a symbol of insult to our people and symbolic of the disrespect shown to us throughout this entire redevelopment process.’

The developer subsequently withdrew this application, but he has indicated that the church needs to be moved to survey beneath it for possible graves. This is not the case. The building is constructed on wooden piles and access to below floor level is possible without movement of the building.

The current state of play.

Today the block creates a dreary sight for residents and tourists with its ugly safety fencing and huge piles of wood chips. The remains of a couple of tree trunks believed to mark the final resting place of Aboriginal leader, James Golding, aka King Budd Billy, King of Jervis Bay stand like gallows. None of this should have happened before the land was rezoned. The site still holds much beauty and the fight to save it continues. The destruction is heartbreaking.

The developer claims the Blacket church will be saved and reused on the property. A lot of people don’t believe him. For several years it has been allowed to deteriorate. The gutters were not even cleaned out during the bushfire season.

The community has failed to get the property heritage listed. Every heritage expert since the 1990s, (except the firm paid for by the developer) says that the site – church building, trees and unmarked graves - should be on the local heritage list. The community has taken this to the NSW Heritage Council several times in the last 18 months. In early 2019 the Heritage Council approved a 12-month Interim Heritage Order, but this was overturned after heavy lobbying by the developers, church and elements of the Shoalhaven Council.

In April 2019 Shoalhaven Council voted to heritage list the property at a meeting with several councillors absent. This was rescinded in a narrow vote at the next meeting. Councillors who support the community and the heritage listing are Mayor Findley, Annette Aldrick, Nina Digiglio, Kaye Gartner, John Levett and Bob Proudfoot. The majority ignored advice from the Chair of the Heritage Council of NSW, the Jerrinja Land Council and the 2851 people who signed a petition in favour of heritage listing. They have worked with the Anglican Church to keep it off the list. The majority on Council does not listen to the community.

The property is owned by the Anglican Property Trust of the Sydney Diocese. The Sydney Archbishop Glenn Davies chairs this Trust. Write to him. He will tell you it has nothing to do with him. We say the buck stops with him.

The story of the block is a complicated one. Check out huskissonheritage.com.au for some background, or find out about the campaign to save this iconic block at fb: @savehuskychurch

You could also choose to agree with the suggestion of the locals to go ‘club not pub.’