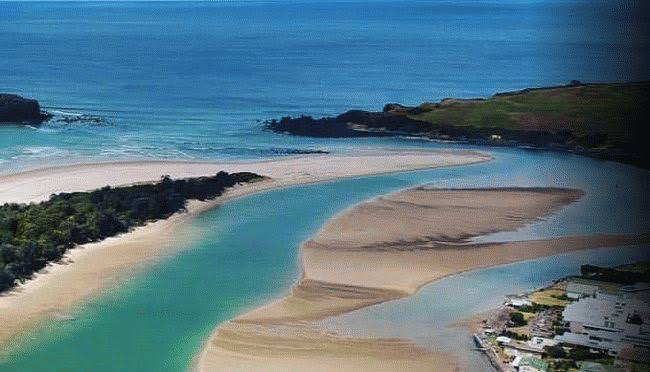 The sand deposits present in the floodplain of the Minnamurra River and in the northern portion of the Rocklow Creek Catchment were laid down during the Holocene transgression period some 6000 years ago. The Minnamurra River has the only twin barrier dune system on the Illawarra coastline.

Sand mining both legal and illegal has taken place here for decades.

In 1975 developers made clear the intention to utilise a large tract of land (28 hectares) adjacent the Minnamurra River and in close proximity to the old Princes Highway for sand extraction.

An Environmental Impact Statement was prepared (Pak Poy 1976) on the proposal, Shellharbour Council sought public comment on the scheme and “there was a tremendous ground swell of opposition …. public meetings devoted to stopping the intended extraction became common place” (Kiama Independent 27/8/1976).

Shellharbour Council sought the objective opinion of Dr RW Young, Wollongong University, who was very critical of the proposal. Shellharbour Council refused the development. The proponent went to the Local Government Appeals Tribunal for reassessment and was unsuccessful.

In 1999 a proposal for sand mining at Dunmore was the subject of a Commission of Inquiry. There was a great deal of community and Council opposition. Approval was given for 25 years of mining to Dunmore Soil and Sand. The original two pits were developed in what is known as the Dunmore Lakes Estate.

Dunmore Soil and Sand was acquired by Boral in 2004. They applied for and were given approval to open up two new pits in the Rocklow Creek catchment – opposite the old Shellharbour station along Dunmore Straight. They are permitted to extract 800,000 tonnes per annum until 2030. This resource has only six months of expected extraction left.

Boral, in 2018, lodged an application to modify their existing development consent to open up two new pits – Stage 5A and Stage5B – on private land in the Catchment of the Minnamurra River. The proposal is to pump the sand by pipeline across to their existing processing plant at their Tabbita Road site Dunmore.

There were 148 written objections lodged during the exhibition period in May 2019, then in July over 1000 people attended the Rally at the Minnamurra River  in opposition to Boral’s  proposal.

This proposal has attracted significant opposition. Both Shellharbour and Kiama Council strongly oppose it. The Member for Kiama and Minister for Families and Community Gareth Ward has spoken against the proposal in the Legislative Assembly. Justin Field in the Legislative Council has strongly opposed it – presenting a 5000-signature petition to the assembly in November 2019.

The matter is now before the Independent Planning Commission. A Public Meeting in electronic form will be held commencing at 12pm Wednesday 29th October 2020. Submissions are being sought regarding this major threat to the pristine Minnamurra River ecosystem.

An announcement on Tuesday 22nd September confirmed that Boral’s application seeking approval for the two new sand mining pits in the Minnamurra River catchment area has been referred to the Independent Planning Commission for determination.

The Commissioners appointed are Diane Leeson and Peter Cochrane who will be convening a Public Meeting on Wednesday 28th October commencing at 12pm. The meeting will be held via an online platform due to Covid restrictions, and you can register to speak at the Public Meeting with registrations closing at 5 pm on Wednesday 21st October.

You can also make a written submission with the deadline for submissions, 5pm Wednesday 4th November. You can submit your comments in writing via email, post, or on the online portal. Written comments are weighed the same as spoken presentations.

The Minnamurra River is a pristine catchment. It is the environmental jewel within the Kiama municipality. This proposal seeks to extract 1,342,000 tonnes of sand from its flood plain which has the potential for major environmental damage for both the terrestrial and marine ecosystem.

All residents and interested parties are encouraged to make submissions regarding this proposal. This will be your only opportunity to make your views known. The Independent Planning Commissioners will make a decision regarding this matter following the public consultation.

One comment on “Sand mining at Minnamurra - a contentious environmental issue.”