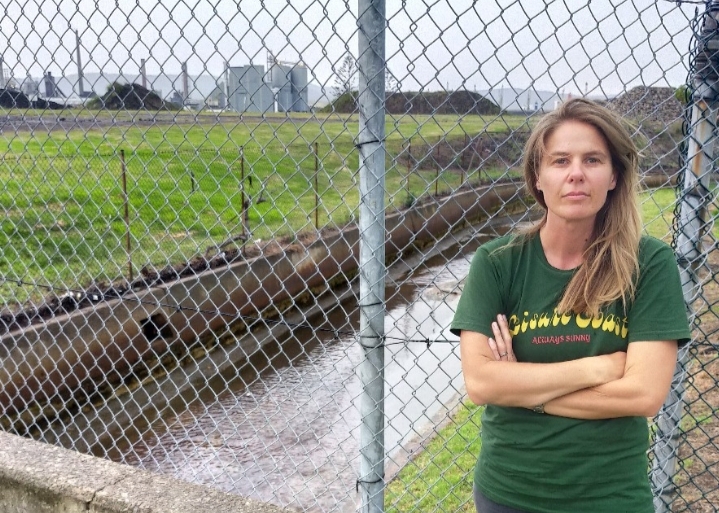 When Something looks Fishy - Investigate

How is it possible that in 2020, a school mum riding her bike home in southern Wollongong could stumble on what might be one of the most polluted waterways in Australia?

Port Kembla has a history of heavy polluting industry dating back to the 1920s. The smokestacks of the Steelworks and Port Kembla Copper gave Wollongong the reputation of being Sydney’s dirty cousin to the south. People who grew up here sometimes joke that they would never tell anyone at a bar in Wollongong you were from Port Kembla, such was its reputation.

By the end of the century the Port Kembla Copper smelter had shut down and industry around the port significantly downsized. The industry that remained had cleaned itself up under stricter environmental protection regulations and using new technology. The suburb is now undergoing a phase of regeneration.

Young families are moving to the area, artist studios, live music, cafes and speciality shops are finding a market with visitors and locals on the main street. The sheer beauty of the town, rich with the history of the Wadi Wadi people, its views looking out to the Five Islands from Hill 60 and the spectacular wildlife the islands support, offer a lifestyle that people want to be part of.

In September 2020 while riding my bike home from the school drop off at MM beach (named for the Metal Manufactory that stands opposite the beach) I decided to go via the outer harbour. Along Foreshore Road there is a drain known as the Darcy Road Drain. It runs directly downstream from heavy industry, including the old Port Kembla Copper site and an IXOM (Orica) acid plant.

On this day the water in the intertidal drain, which is fortified with a barbed wire fence, looked suspiciously orange. The next day I returned with gloves, a small bucket on a string to slip under the fence, a larger bucket to contain any spills and a Gatorade bottle. I collected a sample and posted it to a water scientist in Sydney who had been providing local environment groups with advice on other local water issues relating to mining waste at other nearby creeks.

A month later the results were in. Arsenic, lead, copper, zinc, strontium, selenium, uranium and other heavy metals were all dangerously elevated. This was reported to the EPA and frustrated with the lukewarm response we decided to see if this met with community expectations. We delivered the results to the media, at the same time as a visit by the state environment minister to Port Kembla Harbour. Community concern about what was flowing out into the ocean we love - and swim in - and some questions about the drain to the environment minister at his press conference a few hundred meters away was enough for the regulator to leap into action.

The EPA is now undertaking a six-months sampling program of the Darcy Road Drain. These monthly results are published on the EPA website with an impressive level of transparency given they are so far showing concerning levels of dangerous heavy metals. And while the slow process of monthly water sampling of this one particular drain ticks over, the bigger picture of what is accumulating in fish, seals, little penguins, shorebirds and invertebrates remains un-investigated.

In relation to fishing in Port Kembla Harbour, the Port Authority website advises: “Members of the public are allowed to fish from the public accessible areas of the shore within the Water of Port Kembla Port." This includes Foreshore Road, right near the outlet to the Darcy Road Drain.

Occasional road signs at the Port contradict the website advice by simply saying “no fishing”, without giving a reason. Despite the signs, the port is a popular fishing spot. Most spots are fished daily, yet fishers remain blissfully unaware of the potential risks posed by the continuing release of heavy metals, radioactive material, and other toxins in this marine habitat.

Fishers even regularly occupy a spot on the bridge at Springhill Road a few hundred meters downstream from another outlet where heavily contaminated brine waste from nearby coal mines is trucked down the mountain and discharged under an EPA licence.

When you realise what is silently happening here in modern Australia, it is truly outrageous.

The ethics of allowing our fellow citizens to fish for contaminated seafood while multinational companies reap the profits from legally discharging their toxic waste in our public waterways needs an informed public discussion. The only way we can really understand the risks and the impacts of the release of these pollutants is for more research into bioaccumulation of toxins in the seafood caught in these waterways.

The Port Kembla community is ready to call time on being treated as a toxic waste dump for big businesses. The era of don’t look, don’t see is over. We need accountability. The EPAs’ testing program with high level of transparency at the Darcy Road Drain is the first step in the right direction in confronting the toxic waste that continues to be released into our beautiful home.

The next step is that these multinational companies should no longer be allowed to dump these poisons in the creeks where people fish, or anywhere near the beaches where we swim.

The EPA testing period is still underway. Darcy Road drain sampling result data is available to the community and can be downloaded. The New Bush Telegraph will be keeping you up to date on this Port Kembla contamination story.