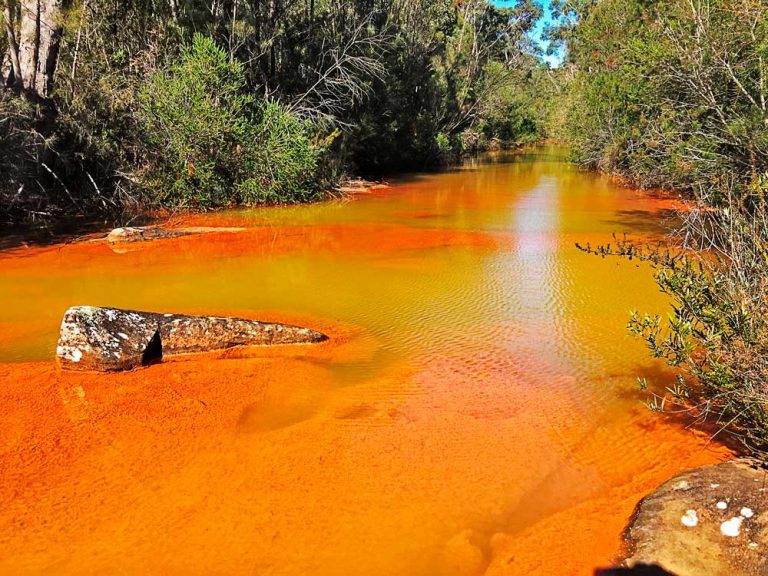 The Greater Sydney Water Catchment supplies five million people with clean drinking water. The active coal mines that dig beneath the catchment cause irreversible damage to creeks, rivers and endangered upland swamps. This not only reduces the quality and quantity of water we need to drink but also ruins critical ecosystems and cultural heritage sites.

Over the last few years the issue of coal mining in the local water catchment has become a focal point of environmental activism in the Illawarra region with thousands of people taking part in widespread, powerful and diverse campaigning to protect our water and ecosystems from the destructive practices of mining corporations.

In 2019 there was an upsurge of environmental struggles in Wollongong, including the hugely successful Global Climate Strike with more than 5000 people participating in the day’s activities. The Strike included a community picket of the South32 coal company offices in Wollongong to highlight and oppose the proposed expansion of their local Dendrobium mine. During this time ‘No Mining in the Water Catchment’ became a key demand of the local climate justice movement, and the Protect Our Water Alliance (POWA) gained prominence as the main group opposing mining in the region’s water catchment.  Located on unceded Dharawal Country in Wollongong, POWA is affiliated with grassroots groups and environmental organisations across the Illawarra, Southern Highlands and Greater Sydney regions. POWA has organised on-going campaigns opposing mining at Metropolitan, Dendrobium and Russell Vale mines.

In October 2021, POWA renewed calls for a halt to coal mining beneath the Woronora Reservoir, which supplies drinking water to hundreds of thousands of people in the Sutherland Shire and Northern Illawarra. Metropolitan Coal, a subsidiary of multinational corporation Peabody Energy, has begun to mine below the Woronora Reservoir for the first time, with approval to continue mining under the reservoir into 2022.

In 2020, a Sutherland Shire Environment Centre petition against the mining received more than ten thousand signatures from local residents, prompting a parliamentary debate which was then put on hold after parliament was suspended due to the COVID-19 lockdown. After NSW Minister for Planning Rob Stokes approved the mining, the City of Sydney, Sutherland Shire Council, Shoalhaven City Council, and Randwick City Council called on him to withdraw his approval and for the decision to be revoked. A coalition of more than 20 independent scientists also submitted an open letter to the NSW Premier seeking suspension of mining in the Schedule 1 Special Areas of the Sydney Drinking Water Catchment, compelled by what they say is "inadequate" science behind the approval processes. "It is not possible to reliably estimate the extent and, accordingly, significance of water losses and water contamination caused by mining in and around the Metropolitan and Woronora Special Areas" the open letter reads.

Peabody and the Metropolitan mine are facing an increasingly uncertain financial future, as was shown during the mine’s months long shut-down last year. The long-term risks to the local environment, such as creeks, endangered swamps, habitats and the drinking water supply, posed by Peabody’s scramble to extract as much coal as quickly as possible, are widely opposed and diverse struggles against them are continuing.

For the past decade, there has been growing opposition to the Russell Vale coal mine involving many people and a wide range of organisations campaigning around local residents’ concerns about coal truck movements, noise, dust and air pollution, the pollution of creeks and waterways, the collapse of Aboriginal sacred sites, mining beneath the water catchment area and nearby Cataract Dam, greenhouse gas emissions and climate change. After failing to gain approval for the mine’s expansion in 2015, Wollongong Coal, which is owned by India based Jindal Steel and Power corporation, reapplied in 2019. In 2020, the Independent Planning Commission of New South Wales (IPC) conducted hearings into the mine’s expansion and POWA coordinated opposition submissions and protest actions around the hearings.

Despite a wide range of submissions objecting to the expansion and many organisations including Wollongong City Council and the Illawarra Local Aboriginal Land Council opposing the project, the fact that Wollongong Coal has debts and liabilities of around a billion dollars, a terrible record on ‘environmental compliance’, has failed to meet its previous water management, workplace safety and environmental protection obligations, has been suspended from the Australian Stock Exchange and an investigation by the NSW Resources Regulator over the company’s fitness to operate a mine and work safely was shelved as it was unable to find them ‘fit and proper’ – despite all this, in December 2020, with support from the NSW government, the IPC gave approval for the mine’s expansion. After being in ‘care and maintenance’ since 2015, mining was planned to begin in August 2021.

It finally commenced in late 2021 in small scale ‘first workings’. An extraction plan for ‘second workings’ using bord and pillar mining to extract a much larger volume of coal was approved by the NSW Government in December.  However the Department only approved less than a third of the mining in Wollongong Coal’s plan, citing concerns of collapse of previously mined seams above.  Wollongong Coal will have to gain further approvals in stages.

Over many years, environmentalists have organised, researched, distributed information, held seminars and public meetings, spoken out and exposed the practices of Wollongong Coal and their parent company. We have conducted traditional and social media campaigns, held stalls, leafleted, petitioned and lobbied local, state and federal politicians. We have rallied, marched, protested and made submissions to inquiries. In the face of the extension of mining and intensifying harm and destruction, there is widespread agreement among those opposing the mine’s expansion that it’s now time for more direct action targeting the company and its operations.

While the ongoing impacts of the pandemic have made protests more difficult to organise, over the past few months there has been a rolling decentralised picket of the mine, a car convoy to the mine’s gates, a community picket of the mine to coincide with the COP26 meeting, and a Christmas themed lock-on action. Another community picket was planned for mid-January but it has been postponed due the current health emergency.

During 2020, the Independent Planning Commission of New South Wales (IPC) conducted hearings into global coal corporation South 32’s twenty-five year plan to expand coal mining at their Dendrobium mine. Again, POWA coordinated public and expert submissions objecting to the project while campaigning around the hearings and continuing to foster widespread opposition to the expansion. In February 2021, the IPC surprisingly decided to block the extension of the mine because it would have unacceptable impacts on water security as well as biodiversity, threaten ecological communities and cause irreversible damage to fifty-eight identified Aboriginal cultural artefacts and values.

The IPC also found the mine would cause serious degradation to twenty-five watercourses and swamps in the water catchment Special Area and release significant amounts of greenhouse gases. The IPC’s decision to protect the water catchment and the environment was an important outcome in relation to numerous ecological concerns and for POWA as the main group opposing the project.

However, the IPC decision was immediately condemned by South32 and criticised by prominent members of the NSW Government, who vowed to overturn it. South32 and the NSW Minerals Council spent much of 2021 lobbying the government on how to overturn the Commission’s decision. In early December, NSW Deputy Premier Paul Toole and Planning Minister Rob Stokes announced they were pushing forward with Dendrobium's expansion by declaring the extension State Significant Infrastructure (SSI), reversing the IPC’s decision. The Government’s decision to grant SSI status followed a motion on the issue in State Parliament, moved by One Nation, which was supported by the Liberals, the Nationals, the Shooters Fishers and Farmers Party, the Christian Democrats and the Australian Labor Party.

The Government has designated the mine State Significant Infrastructure due to its alleged role in providing coal for the Port Kembla steelworks. However, the IPC found that most of BlueScope’s coal came from other mines; the majority of Dendrobium coal over the next 20 years would be exported or transported elsewhere and BlueScope's preferred coal would not be mined by the expansion until almost 20 years into the project. Recently, BlueScope's general manager of manufacturing David Bell told a ‘virtual town hall’ that work on the Port Kembla wharves would allow the steelmaker to bring in coal from elsewhere if need be.

The IPC decision explained that the economic value of the water supply catchment and the costs of greenhouse gas emissions was an equally important consideration as the coal and steel industry. The Government did not mention the water supply, environmental or emissions concerns of the IPC in its announcement of the SSI mine expansion plan. The revised plan would extend the life of the mine to 2041 and would involve the extraction of millions of tonnes of coal each year. This is the first time that a coal mine has been declared State Significant Infrastructure.

Crucially, the SSI declaration removes the IPC and any independent decision-making body from the approval process, making the NSW Planning Minister the sole consent authority for the project. The Planning Department previously recommended that the IPC approve the project and the planning minister has now given himself the power to decide on this project. The removal of independent oversight calls into question the role of the IPC and the departments of Planning and of Industry & Environment (DPIE) and suggests the ‘capture’ of the State Government and most NSW political parties by coal corporations. It is untenable for the DPIE to do the assessment of this project since they previously backed the flawed claims by South32 which were rejected by the IPC.

The powerful campaign opposing extended mining at Dendrobium has resulted in scaling back the impact of proposed mining with the revised plan being less destructive than South32’s original proposal. Due to the collective efforts of environmental and climate justice movements the proposed mine longwalls have been reduced by half, which would potentially involve less damage to the water catchment, and have a reduced impact on Aboriginal heritage areas, with six sites to be directly undermined, compared with twenty-two previously. Nonetheless, POWA continues to oppose any mining in the water catchment as well as the other destructive impacts of the extension proposal. These impacts include perpetual surface water loss, undermining of streams and swamps, a range of other risks to local ecology and biodiversity, undermining of Aboriginal heritage sites, substantial greenhouse gas emissions, and an increased danger of bushfires.

Those campaigning to halt the expansion of Dendrobium are now gearing-up to intervene in the SSI approval process. As POWA continues to highlight, what the Illawarra needs is renewable energy, green steel and a just transition, not expanded coal mining. This is where sustainable jobs and incomes will come from. Mining under the water-catchment must cease before any more damage is done. No money can compensate for the perpetual destruction of something that is priceless.