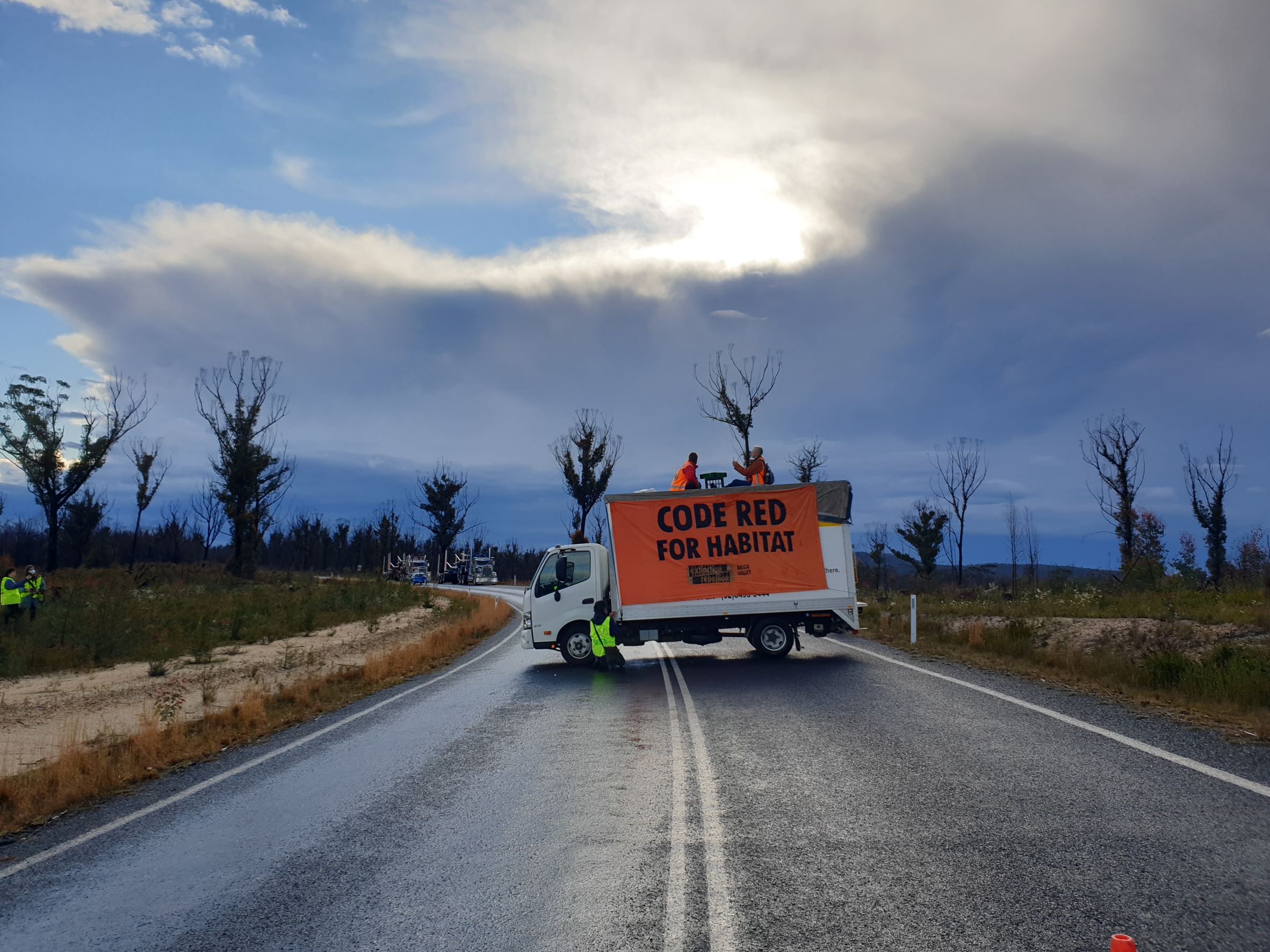 On Thursday morning two local members of Bega Valley’s Extinction Rebellion branch perched on top of a truck and blockaded the ANWE Eden chip mill access road. For five hours the group disrupted business as usual for that day's convoy of log trucks coming into the mill. Two banners on either side of the truck displayed their messaging ‘Stop Ecocide’ and ‘Code Red for Habitat’.

Like many other locals over the last six decades of the mill's operation, they voiced their opposition to the destruction of native forests led by the logging industry with 97 per cent of all felled trees in the southeast region headed to become woodchips in the mill.

The blockade didn’t go off without a hitch, with two log truck drivers pushing through the clearly marked barricades causing multiple people to run off the road and causing damage to the blocking truck. XR understands that the individual human impact of the action is frustrating. One of the bystanding members of XR discussed the pushback from locals who were impacted by the action:

“This is not about individuals, this is about a system. We have tried the ‘proper’ way, we have been doing that for years with no action. We wish there was a way to get people in power without disruption, but this is an emergency and it's time to start acting like it”.

This desperation for action has become more and more urgent as the disaster that was the black summer bushfires decimated local forests and pointed out just how dire the reality of ecological breakdown is. Sally Anne Brown, one of the women locked on top of the truck, called out the hypocrisy of the declaration of a climate emergency and the inaction by local government on this emergency.

“I take no real pleasure in being here, they have declared a climate emergency and I haven’t seen it equate to anything, this is a last resort action. Just the other week a ship owned by ADANI came and took woodchips, they call that ship the Forest Princess which comes and takes fifty thousand tonnes of smashed habitat and smashed lives - talk about hypocrisy and greenwashing lies”.

Bell the other rebel pointed out the severe degradation of the land around the mill. “This land has been impacted by the climate fires and the black summer fires; despite that there has been a continuation of the logging of native forests. This is biodiversity collapse, all around we see that, we can't hear a single insect and can't see a single bird and this is not isolated.”

This hypocrisy is demonstrated with recent approval for expansion of the mill being approved despite 165 submissions against, and an undeniable dire state of the local ecosystems sparking South Coast Forest Rescue and the Environmental Defender’s Office to lodge an appeal. In his ruling Justice Moore stated he will declare that the development consent is invalid, highlighting the criminality of the forestry operations in the area.

This action by XR calls on the community to act on the danger of the climate emergency. “We are not going to pretend someone is coming to save us. We aren't waiting around for political will. We are creating political will and putting ourselves between this industry and its extractive practices which are taking from all of us”.

XR broadly calls for action on their demands for government and corporations to tell the truth about the science of climate change, democratic power in the form of citizen assemblies and a new approach beyond business and political greed.

Phoenix Moon (they/them) is a 17 year-old, year 12 student who grew up and lives in the Bega Valley. They dedicate a majority of their time to climate justice and LGBTQ+ visibility.