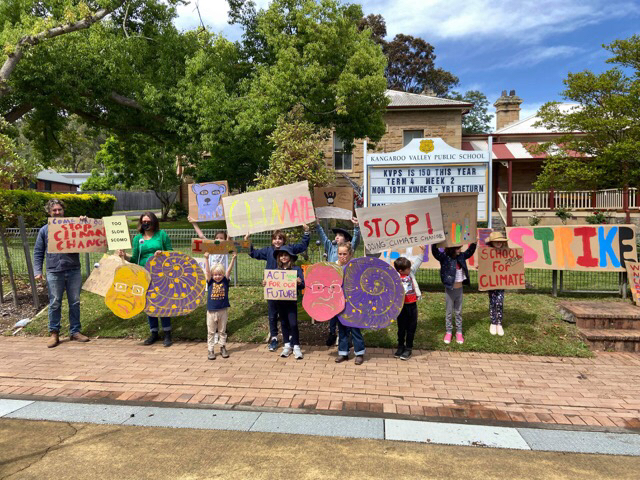 Across Australia on October 15th, people took the day off from school, work and uni to demand climate justice for everyone… even here in Kangaroo Valley!

Friday Oct 15th was the School Strike 4 Climate in Australia, part of a global movement timed just two weeks from the COP26 climate summit in Glasgow. COP26 is being hailed as the last chance for our world leaders to take our future seriously and treat climate change as what it is - a crisis.​

Inspired by Greta Thunberg, school students from every part of Australia have been united by their concern for the future of the planet that we live on and have created one of the biggest movements in Australian history. Before COVID, in 2019, this student-led movement mobilised over 300,000 people to attend over 100 rallies across the country, including locally in Nowra and Bowral.

Like many kids in NSW just now, the Kangaroo Valley students haven’t been able to attend the subsequent rallies due to COVID restrictions. This year 35 strikes were held with the Sydney and Melbourne strikes moved online. With the easing of outdoor restrictions at the start of the week, the local primary students of Kangaroo Valley instead went on strike from their home-schooling.  Through the week they met up to make posters together, then on the morning met outside of the school in a COVID-safe event, in solidarity with the global movement, with their signs, chants, parents and supporters. The world isn't waiting, so neither were they!

With their ‘Honk for Climate Action’ signs, the kids got the town’s attention with overwhelming support from passers-by. For local students like Elsie and Kozi, they know we are in the thick of the climate crisis. ​In a community so heavily impacted by the Black Summer bushfires, we are already seeing the impacts of climate change. ​Yet Australia is ranked last in the world on climate action.

“I’m disappointed that people are treating the planet like this. They don’t respect it enough.” Elsie, aged 9

The School Strike for Climate has three demands:

For more information go to www.schoolstrike4climate.com/about