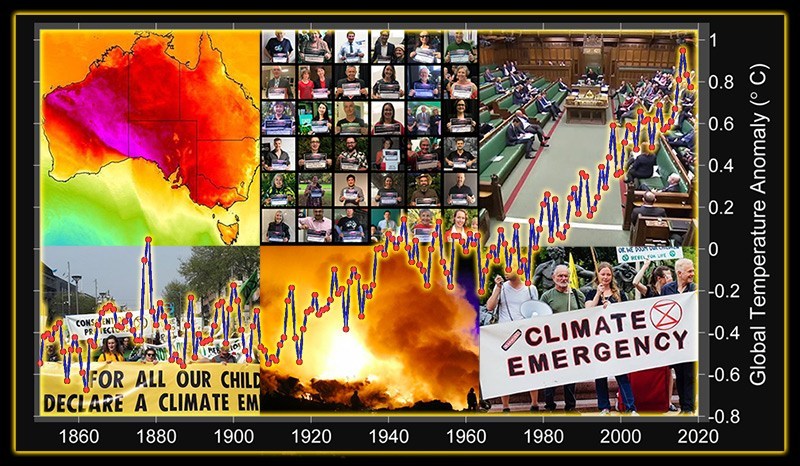 Are we in a Climate Emergency or Not? Accept it Shoalhaven, then Declare it.

In a one-degree warmed world the most important piece of legislation a council could pass is quite possibly the climate emergency declaration. This year, post bushfires, this is more important than ever.

Since its recent formation, Extinction Rebellion Shoalhaven has set its sights at getting the Climate Emergency Declaration adopted by Shoalhaven City Council.

Earlier this year in May Councillor Nina Digiglio raised the Declaration in her second attempt to have it adopted. Unlike the first attempt last year when Council voted down the motion, this time the decision was to delay debate until "after the economic impact of the Covid pandemic".

The Shoalhaven extinction group wrote to the council in September asking for an update on progress for reviewing the emergency declaration proposal; the reply referred them back to the somewhat ambiguous timeframe set – "after Covid".

Why is declaring a climate emergency so important?

Climate change is happening regardless of whether someone ‘believes’ in it or not; or whether a person thinks it is possible to change the course that has now been set. It is happening even if it scares us and makes us feel helpless.

By declaring a climate emergency, it puts climate change at the front and centre of council planning, policy and operations.

A lot is already in progress to reduce emissions - in the Shoalhaven, across Australia and throughout the world. But it isn’t enough. We are already at one degree of warming and we’ve seen the fury of how that exemplifies in extreme weather events. Drought, wildfires, floods.

We are in a warming world and the past decade – the hottest on record – is the coolest decade my grandchildren will ever experience. They will experience three degrees, possibly four, if drastic emergency scale action isn’t taken to halt it while there is still time.

What can Shoalhaven Council do?

Of course, Shoalhaven Councillors can only make decisions regarding the Shoalhaven local area. No one has suggested otherwise. However, we currently live in a country where governments at all levels have failed to implement policies to re-establish a safe climate.

In declaring a climate emergency Council takes on a leadership role in focusing its efforts towards reaching zero emissions within an ambitious timeframe. Both large and small decisions have long lasting consequences and without the risk measure of one metre of sea level rise dictating planning, Shoalhaven Council could face massive liabilities in the future.

As in any situation where a government has missed the cue for change, community-based initiatives are vital where projects can actually make a difference. Everything happens at a local level and Council has the power to force the change needed to protect and mitigate the tragedies we know are on the horizon while government continues to pander to profit making mining interests instead of the people it was elected to serve.

In Australia, where the climate emergency declaration was launched in May 2016, close to 100 councils representing nine million people – over a third of the population – have declared a climate emergency, including the government of the Australian Capital Territory, and South Australia’s Upper House.

Closer to home, Wollongong City Council is on track to reach zero net emissions by 2030 for its operations. These targets and progress go significantly further than the Shoalhaven Councils 2050 net zero target and the current draft Illawarra Shoalhaven Regional Plan 2041. Shoalhaven is now one of only three councils on the NSW South Coast that is yet to declare a climate emergency. The other two are Eurobodalla and Shellharbour.

1838 councils across 31 countries have now taken this important step and are working towards ambitious targets.

Back in May when the Declaration was debated Councillor Mark Kitchener said he wouldn’t vote for the motion because Shoalhaven Council is already acting to mitigate climate change. He scrolled through a list of achievements that couldn’t quiet be seen by residents streaming the proceedings.

No doubt the list included the achievements of the Sustainable Futures Committee, the Renewable Energy Policy and its implementation strategies (that are already exceeding its goals), the City Power Partnership commitments and focus on minimising waste.

Having a Greens Mayor has proved to be a huge boost to progress across the Shoalhaven and so much has been achieved even within a hostile council chamber.

Awards, achievements and recognition aside, there remains a block in Shoalhaven Council that limits and thwarts a lot of progress on issues of environmental significance and has the numbers to push through fairly much anything they choose to, whether or not it is best for the community, the council or the environment.

Why we can’t wait until after Covid.

Residents in the Shoalhaven felt the full ferocity of the Black Summer fires. As the first anniversary of the bushfires that devastated their community approaches, they are looking for reassurances that climate change is front and centre of all Shoalhaven Council’s future planning.

Extinction Rebellion Shoalhaven is frustrated by the continued delays by Council. As Trudie, Kangaroo Valley resident and member of the group states, "I'm concerned about the lack of action and the use of Covid as an excuse to delay. I want a safe future for my children, and that means we need to declare a climate emergency now".

Extreme weather has already become more frequent and intense because of climate change; further global warming over the next 20 to 30 years is inevitable. Globally, temperatures will continue to rise and Australia will have more hot days and fewer cool days. Sea levels are also projected to continue to rise. Tropical cyclones are predicted to decrease in number but increase in intensity. Floods and bushfires are expected to become more frequent and more intense. Catastrophic fire conditions may render traditional bushfire prediction models and firefighting techniques less effective (The Royal Commission into National Natural Disaster Arrangements report).

The Royal Commission into National Natural Disaster Arrangements report released last month unequivocally recognises that climate change fuelled last summer's bushfire season and that we have entered into an era of severe consequences for our inaction on climate change.

"As the events of the 2019-2020 bushfire season show, what was unprecedented is now our future.” Chair Mark Binskin wrote in the reports forward. “Unprecedented is not a reason to be unprepared. We need to be prepared for the future.”

He goes on to say, “We consider there is an important role for all levels of government in relation to managing natural disasters, including, significantly, national leadership from the Australian Government.”

More Australians than ever before are concerned about climate change. Research published in October by The Australian Institute (TAI) showed that "far from dampening the call for climate action, the Covid-19 crisis has strengthened Australian's resolve for all levels of government to take action on climate change," Richie Merzian from TAI said.

This year, more respondents have agreed climate change "is occurring" than at any other time over the survey's history, with 79 per cent agreeing with the statement. The report found bushfires were the impact of climate change respondents were most concerned about.

This Tuesday at the Council’s general meeting – 24th November – Councillor Digiglio will present the motion again, in another attempt to have the Declaration accepted.

Waiting for Covid to be over is a long way off and it’s an unacceptable practice for some community concerns to be taken up and others fobbed off. Councillor Digiglio confided to me that although the motion is likely to be defeated, blocked by the usual distractors, it was important to her to represent her constituents and put it forward. She also reassured me that she was prepared to keep tabling it for as long as it takes for progress to win.

At present the odds are stacked against success with only Councillors Aldrich, Findley, Gartner and Levitt likely to support Councillor Digiglio’s motion. Hope remains however, that the entire Council will back this motion and vote in line with the community’s best interest.

All the excellent results Shoalhaven Council has already achieved in reducing emissions need to be recognised. It needs to be super-charged, amplified, and learning passed on to other councils in a leadership role as the Shoalhaven has proudly done before.

The Shoalhaven area covers over 100 beaches and 165 kilometres of coastline, and the majority, if not all, of its residents live within 50 kilometres of the coast. With all that precious cargo under its care and protection, pledges such as these, one would think, would flow through smoothly with consensus. A little bit of grandstanding perhaps, but never-the-less, smoothly.

3 comments on “Are we in a Climate Emergency or Not? Accept it Shoalhaven, then Declare it.”