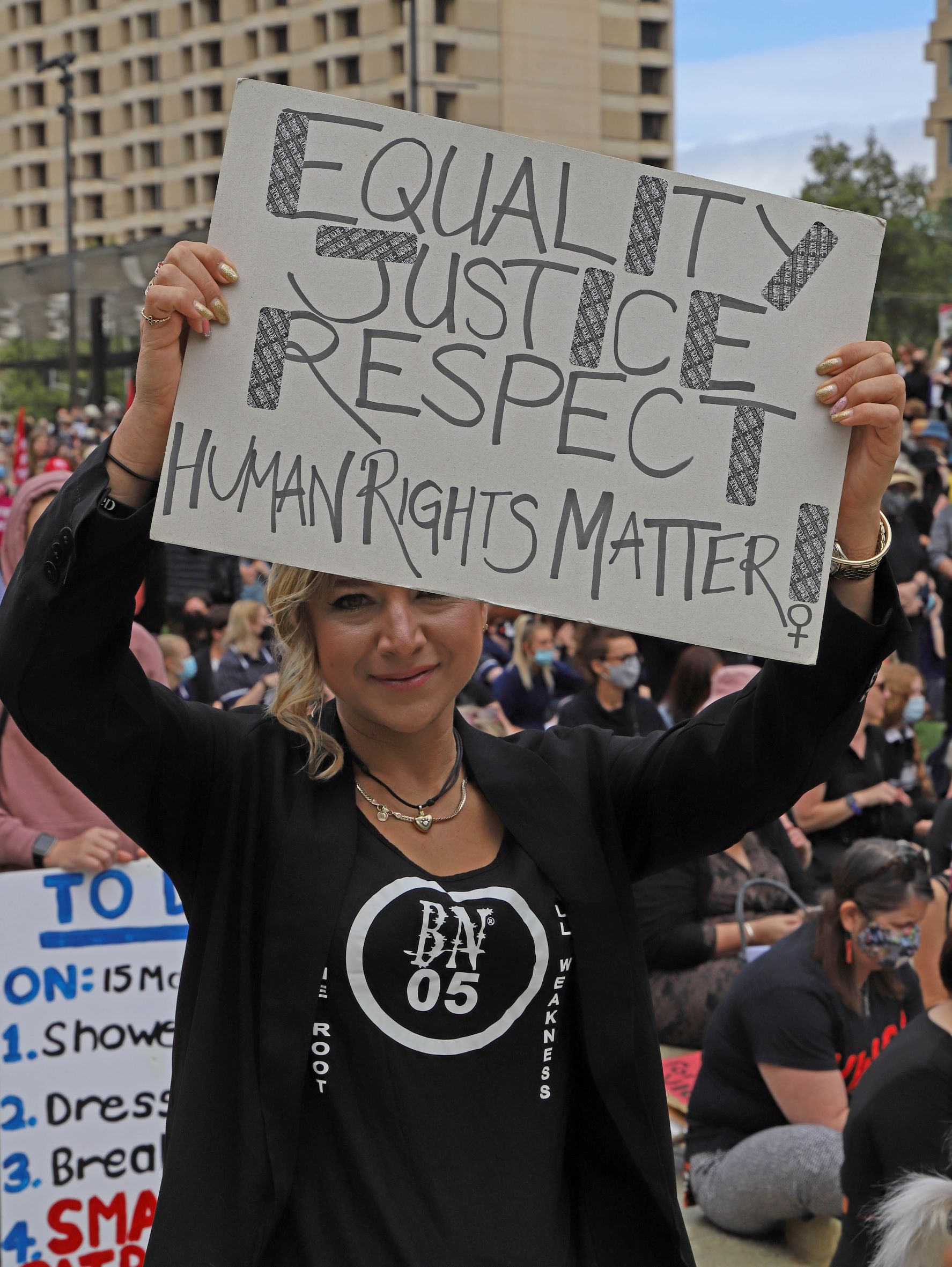 Marching 4 Justice, Across Australia and in the Shoalhaven

When thousands of women came together in March 2021 as part of the newly formed #March4Justice movement it felt like a turning point. The rallies and marches were a spontaneous response to the rage we all felt over the entrenched sexist practices and ‘rape culture’ that were still so evident in 2021.

Under the banner of #EnoughisEnough, we heard disclosures and allegations by 2021 Australian of the Year Grace Tame, former parliamentary staffer Brittany Higgins, and social researcher Chanel Contos, who conducted an online survey reporting on the shockingly widespread sexual assault of teenage girls by their male peers.

While thousands converged at the main rally at Parliament House in Canberra, specifically to protest the shockingly outdated, male-dominant culture permeating our lawmakers’ offices, there were a multitude of smaller gatherings held in towns and cities all over the country. At least 200 people gathered in Jellybean Park in Nowra on a Monday lunchtime, voicing their anger and frustration at the fact that assaults against women and children continue unabated, with no national plan of action.

We knew that if action wasn’t taken to introduce real change, the cycle would continue for our daughters, granddaughters and beyond. And the courage of the younger generation to speak up was singularly inspiring.

The public rallies and massive blast on social media were great for putting gender equality and gendered violence back in the spotlight. The response from our politicians was underwhelming, with our PM joking that we would have been shot had we been in many other places of the world.

The specific demands made by the group in a petition to Parliament were actually very reasonable but were largely ignored. They included the implementation of the 55 recommendations of the Australian Human Rights Commission’s 2020 Respect@Work report, the enactment of a federal Gender Equity Act, and increased funding to raise gender violence prevention to world’s best practice.

At the very least, the astonishing lack of care or protocol around Brittany Higgins’ rape allegations led to Sex Discrimination Commissioner Kate Jenkins being appointed to delve into the extent of the problem in Parliament House. After seven months and input from 1700 people, she produced in November 2021 the Setting the Standard Report.

It contained 28 recommendations, the first being that Parliament should publicly acknowledge the many victims’ experiences of sexual harassment and assault, the impact that it and the lack of action has had on them, and a commitment to change. The Prime Minister and other MPs acted on this in their last sitting week, making a public apology to all who had suffered from bullying, harassment and assault in that building.

It remains however, that nothing has changed, and in the world outside Parliament, we find little joy. Assaults against women and children have continued to rise over the last decade and in 2022, a woman is still killed every week by her intimate partner, family member or ex-partner. Reports of disrespect, unjust treatment, and assault continue to flow from schools, defence forces, the mining and construction industries, and other private and government workplaces.

A Religious Discrimination Bill which would allow schools to dismiss students and teachers on the basis of sexuality, was recently debated in Federal Parliament. Although the bill was shelved for the time being, there is no recourse for the many gay or trans teachers and staff who lose their jobs, careers, self-esteem and livelihood due to their sexuality. Even though it may have been prohibited to expel students on the basis of sexuality, they are still bullied endlessly, often with the clear knowledge of the school.

A more recent discussion initiated by the government has been questioning the place of trans girls and women in women’s sport. This will only bring more unnecessary pain and vilification for a vulnerable group.

Sexual discrimination, harassment and assault occurs across all sectors, but the impact is exacerbated where other entrenched forms of discrimination come into place. Sexism intersects with gender diversity, racism, poverty, homelessness, disability, mental illness and unemployment to create layers of disadvantage and injustice. In this movement for equality and justice, we say no-one has equality until we all have equality.

With so little change having taken place we’ll be out making our voices heard again from Sunday 27th February, on the streets, on the airwaves and online. The national M4J group is planning a series of follow-up #March4Justice2 gatherings, starting on Sunday 27th February and encourages local groups around the country to organise opportunities for supporters to #Marchwhereyouare. The purpose is to keep the issue in the public eye with a range of more localised, Covid-safe rallies, marches and protests that demand practical measures to bring about change.

One such event will be held in Bega on the Far South Coast, at Kisses Lagoon at 10.30am. See the link here for more details.

In Nowra, on Friday 4th March, March 4 Justice South Coast is joining Reclaim the Night, an event being held by International Women’s Day Shoalhaven, in partnership with the Shoalhaven Women’s Health Centre and Shoalhaven City Council. It will be a march and rally calling for the systemic and cultural changes that are required to end gender-based violence.

‘Reclaim the Night’ marches began in the UK over 40 years ago as a response to police warnings to women to stay home after dark to keep safe. They were based on the reasoning that women had an equal right to be out at night, while pointing out too, that much of the violence against women was actually carried out in the home, and that it was the behaviour of the perpetrators, largely male, not the victims, largely female, that needed to be curtailed.

Marches continue to be held world-wide to demand the right of women and vulnerable people to inhabit private and public spaces at night without the threat of violence. A march had been planned for Nowra last year but had to be postponed several times and has been re-scheduled to March this year.

We are pleased to have the support of Shoalhaven City Council and to have Mayor Amanda Findley and Aunty Ruth Simms join us along with other excellent speakers advocating for sexual equality and social justice. The music entertainment for the evening is by young local musician Tayah Larsen.

Although the event is predominantly for women, it is a family friendly event and men and children who support the message are welcome to attend.

The march starts at Nowra Showground on the small oval just inside the Junction Street entrance. Those marching should gather from 5.30pm in preparation for a 6pm start. The colour theme will be green, purple, black or white. We encourage you to make your own sign. The idea is to get creative and bring your own sign that communicates the main message you wish to get across.

After a welcome and briefing the march will take off through the CBD winding up at Jellybean Park where there will be speeches and music from 6.45 to 8pm. If you are unable to march you can arrive directly to Jellybean Park. We acknowledge we will be walking and gathering on unceded Aboriginal land.

COVID safe measures will be put in place to keep the community safe. Please register through Eventbrite as Covid restrictions limit places, however more tickets will be released as restrictions ease and the space allows.