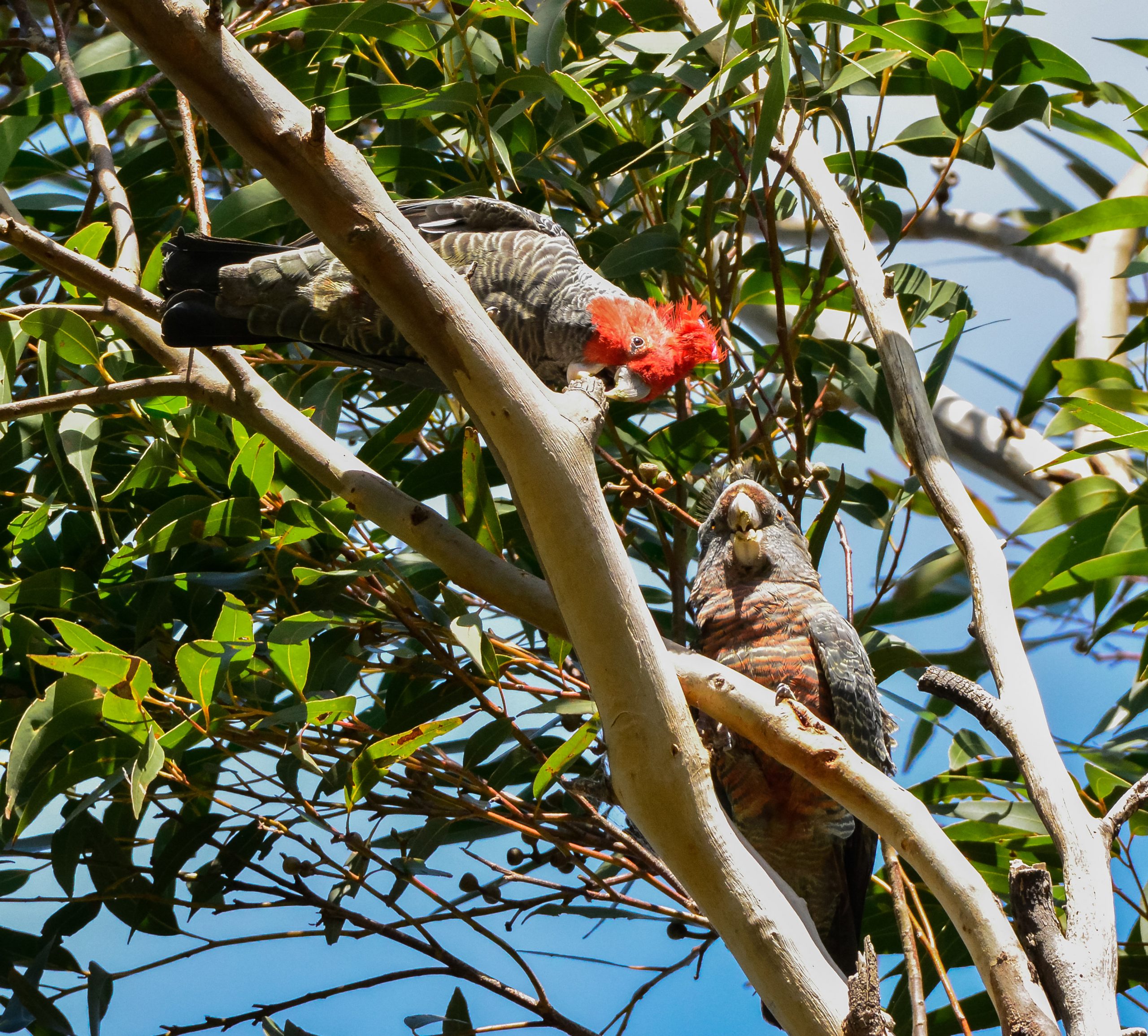 A Vigilant Community Goes in to Bat for the Gang-Gangs

When it was apparent that a development approved long ago was about to be resurrected and commenced, Huskisson residents were immediately concerned. The site of a proposed apartment complex at 4 Murdoch Street, on the banks of Moona Moona Creek with a marine park sanctuary zone and the Jervis Bay National Park as neighbours, could hardly be more inappropriate for development.

It would be highly unlikely to be approved today and in fact under current legislation the approval would have lapsed for want of commencement, but this is a zombie relic from the past when development rules were more relaxed.

However even then Council approval was based on strict terms of environmental management with many hoops and hurdles to overcome. But would the developer comply and who would supervise on a daily basis to make sure that they did?

The community was justifiable concerned. The site was fully vegetated with old growth trees bearing hollows for wildlife and there were so many other issues besides, that an action group was formed. Members volunteered to supervise work on site, from outside the fence, to witness and try to ensure compliance, knowing that Council staff couldn’t be there all the time. In fact two hours work is undertaken each day before Council phone lines are even open.

This is what has happened so far with all these incidences breaching DA consent conditions.

The rate and scale of the clearing work made it impossible for the ecologist on site to check for disturbed fauna and within hours the vegetation (including three huge old Blackbutts) on the whole site had been destroyed except for a few hollow-bearing trees, clearly marked but without any protection against operations. Urgent phone calls to Council went unreturned and it wasn’t until work had finished for the day that Council’s environmental health officer arrived to take photos.

The next day, despite having told observers that they would not be back, the contractors returned at 7am with a cherry picker and other equipment. A tree climber then proceeded to climb a 30 metre Blackbutt marked H (hollow-bearing) close to the security fence where Gang-Gangs had been sighted displaying nesting behaviour. The ecologist required to be on site was observing and allowed this to occur.

A pair of Gang-Gangs were at a hollow in the tree and making distressed calls; this behaviour went on for about 30 minutes until the birds eventually left the site and didn’t return until later in the afternoon when the work site had been vacated and peace had returned to the devastated scene.

Several observers watching the operation attempted to speak to the workers and ecologist from outside the fence and asked them to stop the operation but they were ignored. The tree climber did not speak to the observers until he had successfully secured himself at a hollow. He said he was planning to inspect the hollows of the tree and if empty block them. He said he would speak more fully when he was back on the ground. He continued to take photographs and inspect the tree.

This all occurred prior to 9am when Council would be open. The incident was phoned in as an emergency to the Council out-of-hours service at around 7.15am. The advice received was that a ranger would be sent out as soon as possible but that nothing could happen until 9am. At 8am Council’s environmental planning assessment team leader was contacted at his home in Kiama. It was just luck that a concerned community member knew the staff member well enough to have his mobile number and he was able to prioritise the incident, drop everything on the basis of a verbal account of what was happening and within an hour get on site and take charge, immediately stopping work.

It transpired that the tree being climbed was one which according to the approved vegetation plan had been determined not to be removed and therefore the hollows did not have to be examined, let alone blocked off (why they would do that makes no sense).  The fact that Gang-Gangs were present and exhibiting nesting behaviour was significant and for that reason alone the tree should not have been climbed and all clearing work should have ceased.  Council should have been informed by the development project manager, or a delegate, of the vulnerable species on site needing to be managed, so that an acceptable plan of action could be determined and agreed upon.

Now at this point it is important to acknowledge that the Gang-Gang cockatoo is a threatened species, listed as vulnerable and in steep decline across most of its range which is confined to the south-east coast of Australia with small populations inland as far as Canberra. It exists nowhere else and since the fires of two years ago has lost a huge amount of habitat, with its numbers tumbling over the last three generations and only 30 per cent of the population left. This is a bird species in serious trouble and they need a particular habitat to survive, importantly one with an abundance of nesting hollows. This is why the development action at 4 Murdoch Street, Huskisson is so significant and such a threat. It is a criminal offence under the Threatened Species Act to “knowingly damage” Gang-Gang habitat which is defined as “any area periodically or occasionally occupied” by the birds.

Numerous other compliance conditions were breached on just those first two days. It wasn’t just that correct procedures for protecting vulnerable species were not followed, or that the contractors didn’t appear to know what trees were to be retained, with no legible plans available on site, no sediment erosion control (the JB Marine Park is right next door) or fencing to protect trees to be retained from the heavy machinery. Adjacent public land has been damaged by heavy machinery and run-off has already occurred with site access not being prepared to prevent this.

This is what the community always feared would happen. Where is the supervision? Where was the project manager? Why didn’t a compliance officer check the site before work commenced to ensure all conditions of consent had been met? You can’t just leave it up to the contractors - they may neither know nor care what the conditions of consent are. Why has it been left up to community volunteers to form a roster to undertake such supervision on what has always been a highly contentious, environmentally sensitive development? Thank goodness for those volunteers as work has been stopped for now but the contractors will be back (will they be prosecuted? will the developer?) and we wait with anxious interest to see what will happen next.

From OUR FUTURE SHOALHAVEN

Last week and this week have seen major incidents occur at the development site in Murdoch Street, Huskisson which as you probably know borders the National Park and is very close to the JB Marine Sanctuary zone.

Major breaches to DA approval conditions have occurred and Keep Jervis Bay Unspoilt has made a formal complaint to Council. The Mayor has been informed and visited the site to see for herself. We alerted Council to the presence of Gang-Gang cockatoos exhibiting nesting behaviour (along with many breaches of compliance) and consequently work on the site has stopped.

Our plan is to continue monitoring the site daily and we need extra volunteers. If you are able to volunteer to go on the roster please email ourfutureshoalhaven@gmail.com

The developer has expressed concern over what happened last week and insists the professionals on site were not following his instructions. Regardless of this, it is time for the authorities to resolve the issues.  Most importantly measures must be put in place to stop any further breaches and our intention is to try to ensure this happens.

What you can do:

1) Write individual short letters to the mayor and councillors protesting against the behaviour of the ‘professionals’ responsible for the breaches. No need to detail who or what happened, just say you are aware serious breaches have occurred during clearing of the block with regards to protecting flora and fauna, including nesting Gang-Gangs.

3) Tell all your friends about Murdoch Street and recruit them to the campaign ... you'll be surprised how many local people don't know what's going on there.