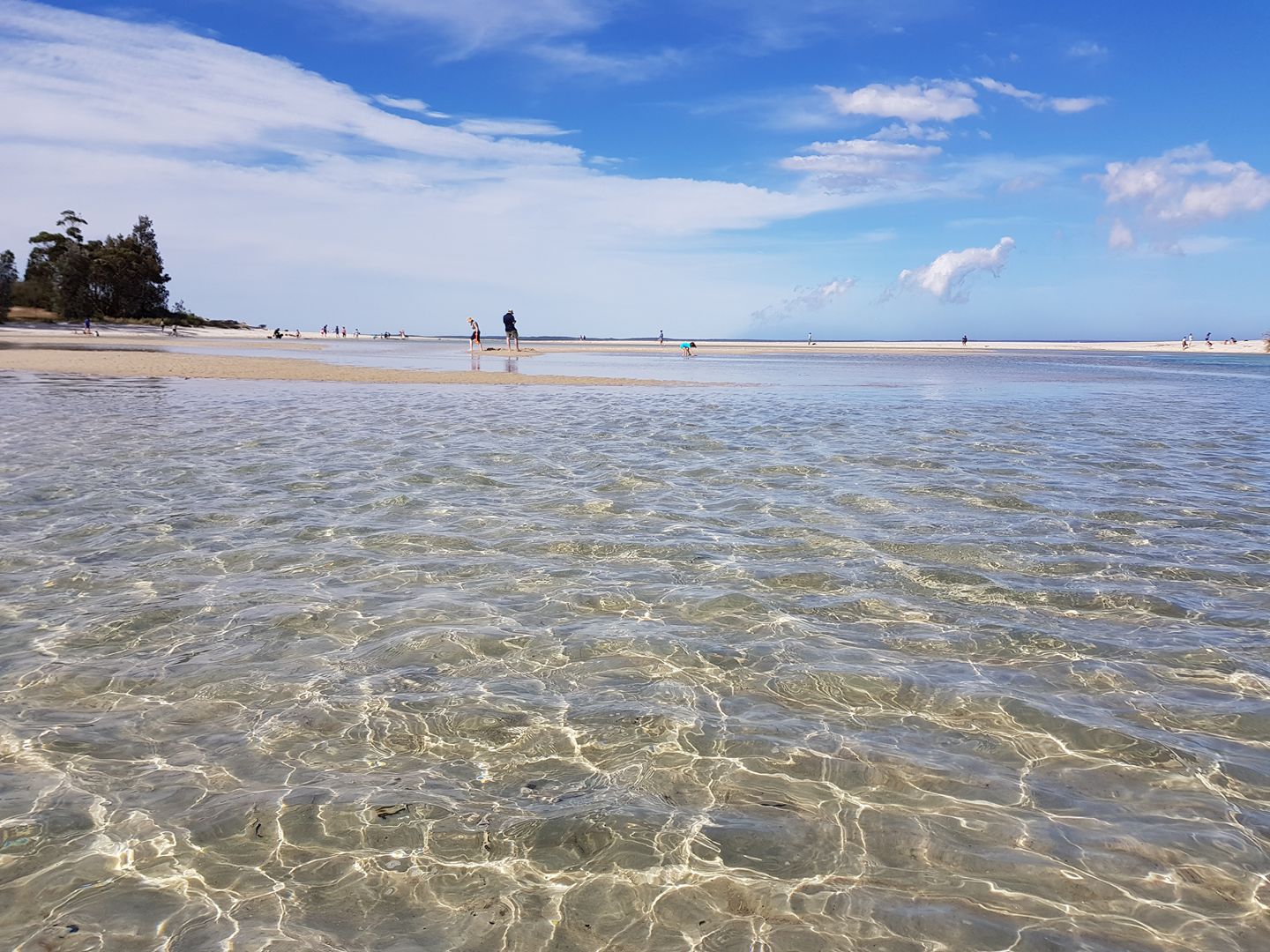 The ongoing saga of the zombie DA for Murdoch Street, Huskisson has entered a new stage. On the banks of Moona Moona Creek, the old approval got sold on to a new developer in late 2019. This 12 year-old zombie DA resurrected from the dead is frightening because it is extremely close to Moona Moona Creek and the Jervis Bay Marine Park sanctuary zone. It also borders Jervis Bay National Park and is part of the tiny 20 per cent of south coast forest fortunate enough to escape the Black Summer fires.

Unfortunately the land is next to a recently built block of units - “AquaMist”- which set a precedent for this style of development. Council was asked to intervene but the majority of councillors voted against doing anything, so the community went ahead alone in their attempts to find ways to stop this new apartment complex being built. As there appeared to be no real options open either through federal, state or local governments to stop this development going ahead, community representatives met the developer to ask him to think again and the team at Keep Jervis Bay Unspoilt worked very hard last year to persuade this new owner to scale back his development; we even suggested that he abandon the project and donate the bush block to NSW National Parks and become a Shoalhaven hero.

Discussions took place in Huskisson last July at the request of the owner, now known to us as Nik. When we approached him to express concerns about the 2010 development approval he had bought, Nik was quick to say he didn’t like the DA at all and was keen to do something in Huskisson to raise the bar of architectural design of development. He said he was personally interested in his development being environmentally sensitive and in keeping with community desires.

During the community meeting slides of smaller scale developments and bush retreat style accommodation were shown to illustrate designs the community was likely to find more attractive. Nik, seeing these, said we were obviously on “the same page”. He had been upfront about not wanting to donate the entire block to the National Park, but some of it, maybe. He left the meeting saying that he respected the passion of the local community about preserving Jervis Bay and he would consider our views and planned to return in a few months with new designs and ideas.

Covid prevented a 2nd second face-to-face meeting. However periodic communication by phone continued, during which it became apparent that Nik did not want the expense and time delays of a new DA and Council was testing him with the strict rules about the limitation of any modifications he would be allowed to make.

You can imagine our surprise when, out of the blue, news of his modification application to Council hit our inboxes last Friday and we were confronted with the set of “up close and personal” images. The images obviously don't suggest a scale back of any kind and definitely don’t blend in with the surrounds which we had discussed. Facebook comments have been consistently negative as shock waves spread amongst followers of Keep Jervis Bay Unspoilt. Apart from being at odds with the character of its bush setting, KJBU is concerned about expansion of developments too close to waterways. Visualising this big bold development on the banks of Moona Moona has triggered a huge emotional response.

Let’s also point out the impact of unexpected clearing of the block last September and the sight of the ruined landscape that the community has been living with ever since. What would replace the beautiful eucalyptus forest that was bulldozed down in a matter of hours has been front of mind all spring and summer. Is it any wonder members of the community spoke out so virulently when they saw what was possibly coming to take its place.

KJBU is examining every detail of the modification application; not all the information required is available as yet but there is enough to get us started. There are some obvious improvements to sustainability qualities in the design and construction, eg harvesting rainwater for irrigation, solar power, dispensing with gas as an energy source, taking better advantage of passive solar and breezeways for cooling.

The footprint hasn’t changed but the number of units has increased from 32 to 38. The footprint is something that Council deems cannot be changed without a new DA regardless of the direction of change. So even a change to reduce the size, as we would have preferred, would require a new DA.

This fact has serious implications for the rest of the arguments used by the planners to promote their modifications. It is also why many of the local community oppose it. Moona Moona Creek Reserve does not have the infrastructure to deal with the level of tourism it encounters now let alone such an increase as this and the rest that will follow. Parking and road safety is a huge problem, so by adding another 38 units packed to the brim with guests in an ever extending peak season, travelling to and fro in multiple cars to fit in all the holiday paraphernalia is something Council and ultimately ratepayers need to take seriously. Even a two bedroom unit is likely to have guests arrive in two cars as expensive rentals are often shared by couples.

With up to 150 tourists over holiday periods in these proposed units, how will Council maintain and protect the native reserve between them and the creek and stop residents taking short cuts with their kayaks or paddle boards through the bush and mangroves to access the creek and thereby avoid crossing the endless traffic along Burrill Street (the one and only link road between Huskisson and Vincentia and the rest of the Bay’s amenities).

Other statements in the planning document must be examined such as this site not being located within a coastal vulnerability area. Common sense tells us this is dubious regardless of mapping data referenced. The consequences will be dire if these threats are ignored; consequences the developer need not worry about after he has sold the units to unsuspecting buyers.

Our scrutiny of the documents submitted so far indicates that the heavy-duty engineering exercise required for this development, with or without the modifications, will have consent conditions almost impossible to achieve and for the project to remain financially viable. If you make rules in the conditions of consent that can’t be achieved at a cost no developer would want to pay, then approval shouldn’t be given. Council must act responsibly, they must know of the breaches developers get away with. This consent is like setting rules made to be broken.

Another reference to the tree clearing event illustrates the point in question. Within hours of the tree clearing exercise starting, breaches of the consent conditions occurred. Local observers frantically and determinedly reported the breaches to Council. Council did on the second day intervene and stop all work. Had the locals not been watching who knows what other irregularities would have occurred. Interestingly no fines or serious penalties were applied. Yes, Nik Bulum and his project manager co-operated fully with Council’s demands, however the fact remains that serious errors were made about the trees to be cleared.

This was Day 1 and 2 so it is any wonder people don’t trust the process. (Read Richard Bates’ article – A Vigilant Community Goes in to Bat for the Gang-Gangs - on the Gang-Gangs disturbed on these days, which by the way did not return to nest and mostly likely never will.)

Does all this sound familiar? Well unfortunately, yes. Let’s get working with the new Council and get some rezoning happening, up-to-date mapping, realistic traffic predictions and let’s have stronger rules about style and design. Let’s put tourism into perspective, surely looking after Jervis Bay’s pristine waterways and bushland must be first and foremost. From every point of view this must be the number one priority.

Back to Murdoch Street, please have a look at the modifications being proposed by using Council website’s DA Tracker. The code for this application is DS22/1032

Write a submission to <development@shoalhaven.nsw.org.au>

Send a letter to the Mayor and Councillors expressing your views. Keep up-to-date by following Keep Jervis Bay Unspoilt on Facebook and Our Future Shoalhaven’s website

2 comments on “Moona Moona Creek Still Under Threat from Development”