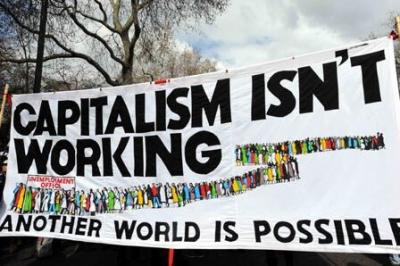 An election campaign in an apparently democratic society is affected by fear to mention the goals and benefits of socialism. Commentators censor themselves. The agenda offered to voters is controlled by a media obsessed with the image of two leaders. In addition, derision by a right-wing press, bullying by shock jocks, basic ignorance of socialism’s principles makes Labor feel that if they mention the ‘s’ word, they’ll ruin their election chances.

Humanity’s election chances are also affected. So too the credibility of Australian political parties whose electoral appeal could depend on values inherent in socialism. Why not say so?

It would be fatalistic to imagine futures dominated only by more of the same competition, violence, selfishness and inequality fostered by neo-liberalism. There are life enhancing alternatives to a society and economy limited by an ideology which powerful financial and media interests consider acceptable. Yet a false piece of history repeats that only in authoritarian so called socialist states, were people’s ways of thinking controlled.

Socialism was not practised in those countries.

Fellowship is the essence of socialism. Nevertheless, emotional appeals about freedom being lost by any move to foster fellowship and collective interests persist in Australian election scenery.

Across the country, thousands of trees are decorated with Palmer adverts for ‘freedom, freedom, freedom’, which imply that one man knows best, or that voters should put their faith in rich entrepreneurs.

A more direct repudiation of what he called socialism came in the 2019 election from the thought-less Liberal Minister Dan Tehan who ridiculed Labor’s proposals for free childcare for families earning less than $79,000 per annum. “This proposal”, he said, “is a fast track to a socialist if not a communist country.”

Replacing a taken for granted acceptance of neo-liberal capitalism by fearless discussion of socialism, would highlight ways of thinking about the future. That transition could use the atmosphere of an election to explain that a non-authoritarian socialism does not immediately reject capitalism but could achieve justice. In Thomas Piketty’s judgement (Time for Socialism 2021), a new form of socialism would be participative, community based, democratic, ecological, multi-racial and feminist.

Catastrophic fires, floods and dramatic increases in the cost of living show poor and other vulnerable citizens at great risk, hence the proposals that abolition of poverty, homelessness and the oppression of women would be priorities for a redefined socialism.

Inequality is the issue. Why be frightened to say so? Plans to vastly improve the pay and working conditions of staff employed in elderly care and childcare provide not only benefits to individuals but would be an enduring project for a common good.

Likewise the objectives of environmental policies which proceed in tandem with every other means of reducing inequalities, not least by addressing huge disparities in wealth and income.

In every context, in the home, the workplace, in social institutions, in corporations and in politics, power relationships must change.

Maintaining advantage by being able to pay for the best in education and health care ensures a permanently destructive inequality whereas a just society gives universal access to education, health care, retirement income, housing and a vigorously protected environment. When that happens, a key socialist goal is achieved: everyone is able to participate fully in social and economic life.

Education to influence ways of crafting a just society must address the connotation of this word ‘taxation’. The most unedifying, gormless election campaign discussion occurs when politicians feel bound to say they will not raise taxes, even though a massive deficit and demand for high standard public services cries out for them to be brave enough to do so. At best taxation is treated as an unthinking negative, at worst as though it is as dangerous as an Ebola virus. Hell bent on so called free markets, on the question of taxation, Australia has a huge intellectual, political and cultural deficit.

My father-in-law was a centrist politician in Norway. He believed, ‘High taxation equals civilisation.’ He knew that progressive taxation protected the vulnerable, reduced inequalities and nurtured reciprocity in communities. Even this centrist politician regarded these as wise socialist objectives.

The absurd negativities about taxation were dealt with by Hugh Mackay in the April 26 edition of Pearls &Irritations. His observations are worth repeating. “Every time a politician talks about tax cuts, the implicit message is, ‘We don’t care deeply enough about disadvantage and inequality.’” He argued for tax rate increases and finished by repeating the claims made by my Norwegian father-in-law. “Where people pay high taxes to fund the services that contribute to a truly civilised society, there’s a stronger sense of interdependency and mutual responsibility in that culture.”

ABC’s Radio National repeats ad nauseam the slogan ‘Think Bigger.’ But in this election campaign, fearful of the prospect of being attacked if they speak of policies for a common good, Labor candidates, apparently anticipating in gotcha specialists in the media, strive to think smaller.

Common good policies include a revived socialism: massive reduction in inequality, speaking fearlessly about the benefits of progressive taxation, preserving a precious environment and ending the oppression of women. Not too much to ask?

Courage in public life requires discussion of diverse ways of thinking and living. In a democratic society’s election, why not take the risk to ‘Think Bigger’?