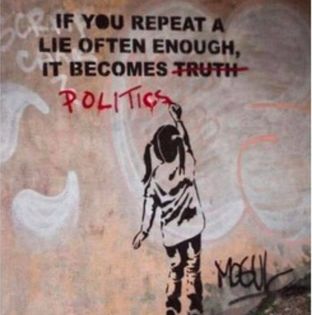 Truths Lost in the Lying Pandemic

Cooperation to achieve peace depends on trust created by parties believing what is said, relying on assurances given and on promises made. Instead of trust bolstered by a search for truth, lying has become a political art, and conned citizens have become enthusiastic imitators.

In attempts to build relationships, to establish national policies for a common good and in the conduct of international relations, the consequences of lying are toxic.

From Donald Trump to President Putin, from Prime Minister Johnson to PM Morrison, from President Erdogan of Turkey to Prime Minister Bennet of Israel, lying is for winning information wars, for deadening dissidents and supporting the ‘might is right’ basis of authoritarianism. As a sequence of the post modernism’s view that everyone can promote their version of truth, the lying pandemic seems unstoppable.

We can’t be sure of the source of this pandemic. There is nowhere obvious to send weapons inspectors armed with lie detectors, but impressive evidence from the Washington Post gives a clue. Their fact check agency recorded President Trump making 492 false claims in his first 100 days as President and 30,573 untruths during his Presidency.

In ‘make America great again’ rallies, Trump so infected his base that the vast majority of members of the Republican Party believe that a scrupulously fair election was unfair. Trump is still the President. US democracy is shredded. Lying guarantees a failed state.

Across the Atlantic, the architects of Brexit promote their lies to the welcoming Murdoch media and to cheering Tories in the House of Commons. Chief liar Boris Johnson decorated the Brexit bus with the lie that leaving the European Union would result in 350 million pounds per week being returned to the National Health Service.

In response to Ukrainian refugees seeking refuge in Europe, the European Union has granted freedom of movement with few restrictions. By contrast, entry to the UK requires online form filling which prospective entrants say is either inaccessible, far too complicated or feels like a deterrent. Johnson’s Home Secretary Priti Patel has achieved her objective to create an environment hostile to refugees, even those who might be blonde and blue eyed.

Johnson and Patel are unashamedly egocentric, their untruths bolstered by boasting. With characteristic bombast, Johnson claims, “The UK is way out in front in our willingness to help refugees.” In proud imitation of her boss, Patel tells the House of Commons that she has set up a visa application centre in Calais for Ukrainian refugees. No such centre exists.

To disguise blatant untruths with understatements couched in neutralised language, powerful leaders resort to the phenomenon known as spin. President Putin refers to the invasion of Ukraine as a ‘special military operation’. Russians who dare to refer to the killing and destruction as a war could be sentenced to fifteen years in prison. Seasoned, poker faced Russian Foreign Minister Sergei Lavrov, tells assembled media “the war is not a war,” “we have not attacked Ukraine.” Kremlin spokespersons tell Russian soldiers that Ukrainians will greet them with flowers.

Perhaps in competition with former President Trump or current British Prime Minister Johnson, the Australian Prime Minister is also a keen member of the lying lobby. From pretending that he was not on holiday in Hawaii to denying that he had ever attacked the introduction of electric vehicles, from insisting that he did not refer to former Senator Sam Dastyari as ‘Shanghai Sam’, to falsely boasting that Australia was at the top of the queue for vaccine delivery, Scott Morrison has abandoned the idea that trust is a crucial feature of government.

His deception of the French President over a submarine contract became a five-star untruth with unending international implications. When President Macron was asked whether he thought the Australian leader had lied to him, his reply was unforgettable, “I don’t think, I know.”

An amoral ‘man for all seasons’ attitude teaches practitioners to do and say what they think they can get away with. In English folklore parlance, ‘you can run with the hare and hunt with the hounds.’ Turkish President Erdogan, an enthusiast for the hunt, presents as a Ukraine/Russia peacemaker. He has bought missiles from Russia, sold drones to Ukraine and is a member of NATO.

Unaccountable false claims on social media show the lying pandemic infecting far more than politicians. Noise from climate deniers, augmented by self-opinionated nonsense from Sky News commentators and from scribblers on the front page of Sydney’s Daily Telegraph, show disdain for science. Karl Popper’s idea of critical rationalism, to seek truths by distinguishing between science and non-science is light years away from the anaesthetising effects of the narcissistic, populist www age of ‘believe what you like’.

These are dangerous trends. Fostering searches for truth and trust are urgent. Teaching requires reliability. Admitting to truthful realities is key to the resolution of domestic disputes.

Achieving peace in Ukraine will require all the parties to admit hypocrisies. Even under the cover of lying, they will have to struggle for truthfulness. Without such a cultural, political, ethical change, we are all lost. This lying pandemic is that serious.