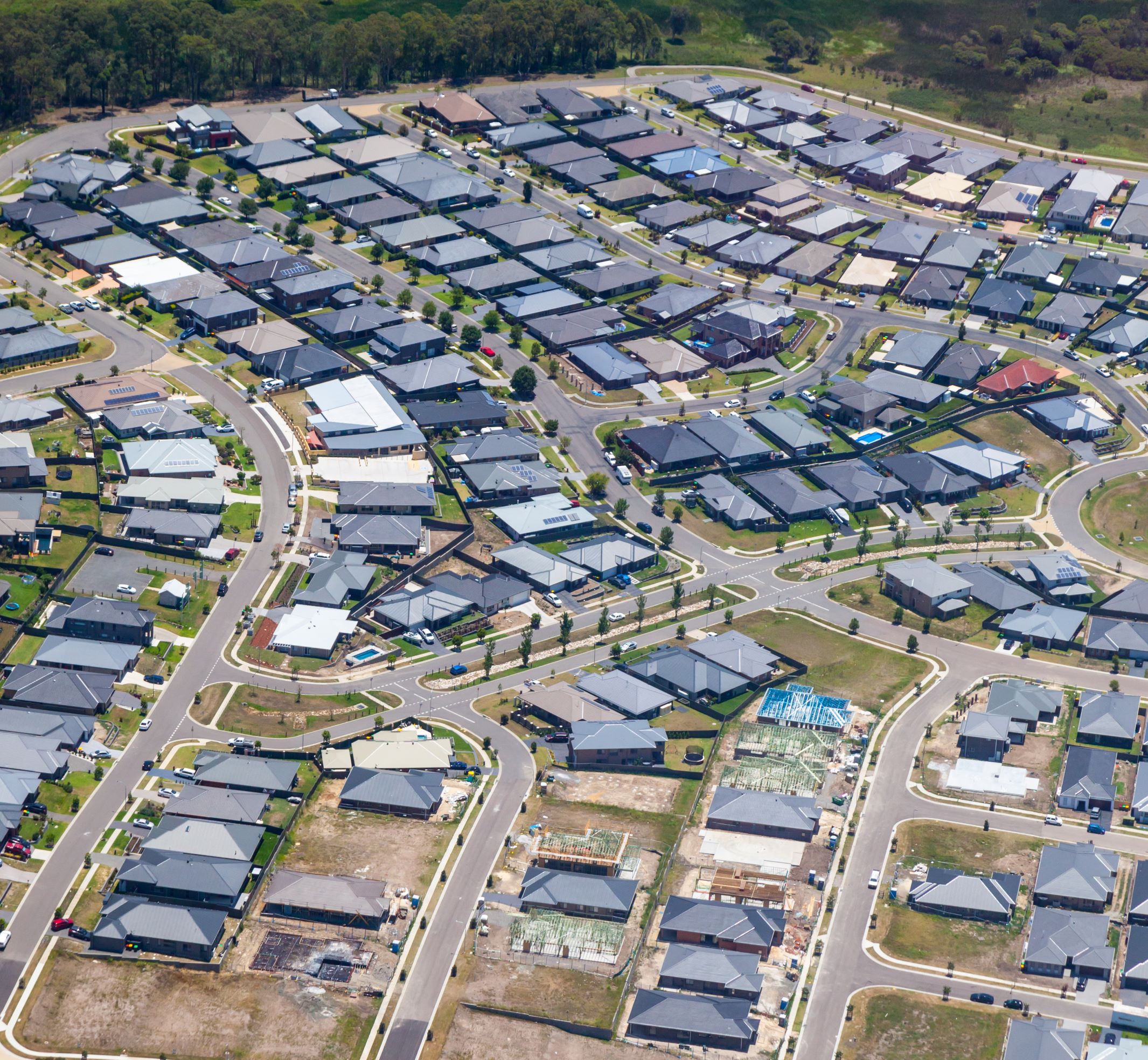 The Myth of Development

Local councils, across the state and country, are still approving the degradation of natural environments and wildlife habitat, allowing the demolition of heritage buildings, sacrificing local character and approving environmentally sub-standard housing instead of insisting on alternatives to the mediocre designs sold by developers. Property developments such as housing estates and land developments or the commercial development of existing properties and heritage sites is never neutral in outcome; it is always either good or bad.

I am not saying anything that you don’t already know. I’m merely trying see through the fog of meanings, different values, policies and behaviours that surround the approval of property developments in order to understand why our precious resources and amenities are increasingly under threat in a time of climate crisis and planning and building regulation scandals. Looking at the development landscape, from vulnerable bushland in Manyana to structural faults in high-rise apartments in Sydney, it is hard not to be dismayed by the planning and regulatory regimes at both state and local levels of government.

The ideology of progress underwrites a pro-development bias in the processes and decisions of local councils that can militate against good outcomes. Definitions of ‘development’ mostly portray it as a beneficial process of change or growth leading to a more positive, advanced state. Development is synonymous with progress, so always for the good. In most contexts, such as medicine, science or technology, ‘development’ means innovation and improvement. Things get better. Unsurprisingly, developers want their projects to present as socially beneficial and good for the economy, but the idea that property development is inherently good, that it carries such connotations, is completely unfounded; it’s a myth.

Nevertheless, despite their having to indicate the absence of harmful impacts of their projects, developers still exploit the word’s beneficial associations.

Such ‘progress’ rhetoric is a powerful weapon with strong public appeal, regardless of the state of the economy. However, it is baseless rhetoric and opponents should not be subjected to a ploy that developers love to use and that councils unthinkingly condone.

Government’s reluctance to regulate private sector enterprise in order to produce socially responsible development and the protection of environment and heritage is based on the established political ideology of progress through development. This only serves to promote an accommodating attitude to development that permeates the private sector and local councils alike, encouraging a complacent, cosy symbiosis at the local level. But things done in the name of progress don’t necessarily leave us better off. If the development in question is for commercial gain, is financially successful but detrimental to the common good, only the developers benefit, though they may suffer reputational damage down the track. However, if the development is profitable and also adds value to its social and environmental context, everyone stands to gain.

Social and ethical values that guide and restrain the profit motive do not seem to be built into the development approval system of local government. The DA process sets a very low bar in not requiring a contribution beyond improved land use value and setting minimum negative impact standards.

A submission prepared by the NSW Division of the Planning Institute of Australia in March 2012 notes that: Current ‘development controls’ in LEPs and DCPs are often couched in negative terms- what cannot be done through strictly legally defined terms and (not always but often) a ‘tick the box’ assessment approach against multiple numerical and other standards. This may be designed to provide certainty for the participants in the system, but is often aimed at preventing the ‘lowest common denominator’ development rather than facilitating good development. Clearly this hasn’t happened, with applications of moderate complexity often determined on a legal definitional rather than a planning merit basis and excessive time and money spent to obtain uncertain outcomes, the planning outcomes of which often have not benefited from the process.

Shoalhaven City Council’s DCP Chapter2: General and Environmental Considerations covers contaminated land, European heritage and Aboriginal cultural heritage but offers no general criteria or conditions for good development, private or commercial. We can glean some conditions from government department guidelines such as Your guide to the Development Application process. Small housing development NSW Department of Planning and Environment May 2018:

“Why are DAs required? A development consent permits a new building that will change our environment, and may affect our amenity or the amenity of those around us. A DA is required to:

1. Manage change to ensure that the cumulative impacts of developments do not negatively affect the environment.

2. Balance public and private interests by ensuring new development fits the character of the area and sits comfortably within the ‘public domain’ (e.g. streets, laneways or public reserves).

3. Provide an impartial process which allows interested members of the community to raise issues, to ensure a balanced and considered outcome for all.”

These are still relatively weak criteria. Councils should be mandating that all developments add to the social, environmental and aesthetic value of their sites. In heritage towns, such as Berry, it is a matter of urgency that complying developments be replaced by DAs that are governed by local character guidelines if new developments are to fit the character of the area.

Protecting local character and ensuring that regulations are followed would require councils to embed the services of reputable architects, environmental experts, heritage consultants and others in their planning regimes. By embedding expertise, councils would automatically lift their game, allowing them to make more discerning, confident assessments and stricter recommendations in the DA process.

Pro-development bias in the DA process

A favourable stance on development by local councils has led to a systemic bias in the DA process. Ratepayers have a right to object to aspects of any development, but in the Shoalhaven the lack of assistance starts with the complete absence of any procedural advice to objectors on its website. Residents are left to defend their amenities against the developer’s threats, to carry the cost of expert consultants reports and legal advice and to complain of detrimental impacts and breaches of process and law, all of which can be an expensive, time-consuming and very stressful experience. It can end - as in the recent Mananga DA (see below) which included some 500 objections and Council staff’s comprehensive recommendation to refuse consent - with a politically engineered vote by councillors wiping out all of this work in an instant.

Where ideology alone is sufficient incentive to motivate a councillor’s decisions they are not based on merit. Our council voting system (often just a matter of mustering factional numbers) combined with discretionary powers, shields councillors from accountability and can rob us of our right to fair, impartial and merit based decisions.

The NSW Ombudsman’s guidelines on good conduct and administrative practice state that: No public official has an unfettered discretionary power. Public officials must exercise discretionary powers in accordance with any applicable legal requirements and their delegated authority. They must do so reasonably, impartially and avoiding oppression or unnecessary injury.

The essential components of the appropriate exercise of a discretionary power include:

- implementing the decision properly, which is to say in compliance with legal and ethical obligations

- by asking the right questions

- by using a fair process

- based on evidence (including an analysis of the evidence)

- based on the merits

The  Mananga DA (a case study):

In a recent Shoalhaven City Council decision giving the owners of Mananga homestead in Berry consent to operate a wedding function centre, otherwise prohibited in the zoning, the voting councillors had to choose between two opposing cases: the Council staff’s recommendation to refuse versus the developers’ own case, presented as an alternative by retiring councillor Andrew Guile, a member of Greg Watson’s Shoalhaven Independents who routinely vote as a bloc on development issues. Each case included expert technical reports as well as legal opinions from senior counsels.

The Mananga vote was not a straightforward public interest decision. The voting councillors had to focus on the merits implicit in this particular dispute, represented by opposing expert and legal opinions on a heritage incentive clause in the LEP, not on whether they favoured a wedding function centre or development for its own sake. Even though these latter considerations were extraneous, they took centre stage throughout the DA process in the proponents’ campaign and helped to obscure the relevant issues.

I would argue that even though the councillors had the discretionary power and the delegated authority, they lacked the expertise to vote on the basis of merit. In this particular case they had to be able to say not just that either side had merit but that one was more meritorious. They may well have had a preference for one over the other but, lacking the expertise, they could not have made a choice between them based on merit. The merits of the legal opinions presented were specific to law and required specialist legal expertise to assess their merits. Such an assessment was beyond the competence of the councillors. A third party adjudicator would be required for this and, I would argue, only the Land and Environment Court would have the authority and credibility in this kind of scenario. This is what the Council should have anticipated.

In other words, the voting councillors, faced with the choice between two opposing expert opinions, should have acknowledged that they were not in a position to decide on the relative merits and acted with integrity by following Council staff’s recommendation to refuse. The particular circumstances of this case set a limit to the discretionary powers of voting councillors so that, even though councillors may have voted in good faith, their vote to approve the DA was (and should have been deemed) technically impossible.

There are currently campaigns in Huskisson to save the Holy Trinity Church and  prevent a massive tourist over-development at Moona Moona Creek; in Manyana to protect wildlife habitat bushland. That  citizens have to fight Council and developers to save these precious assets in 2021 says a lot about the regressive state of the council-politics-development nexus. Local councils must urgently move to another level by promoting imaginative, responsible development. They must no longer be in thrall to a development ideology and to developers. They must be as proactive in protecting residents’ amenities, the local character of the built environment and heritage and our precious natural landscapes as they are in assisting developers with projects that are required to prove their social benefits. Sound Council policy is evolving but, like Federal climate policy, it doesn’t seem to understand the scale of the problem or urgency of the situation.

Richard Hook is a member of the Defend Berry Heritage Community Association, a newly formed association for advocacy and protection of heritage in Berry.