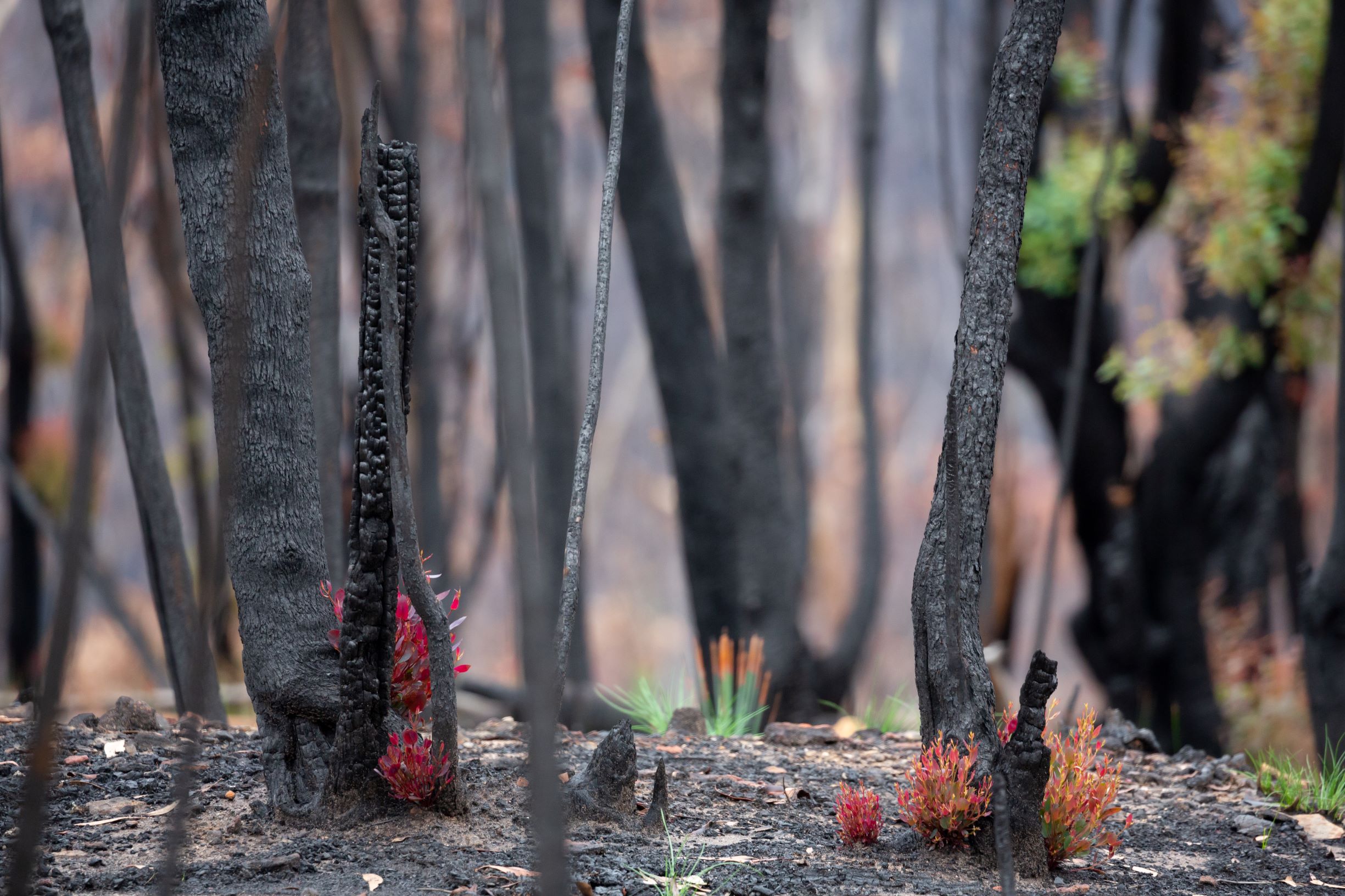 Logging Must Not Resume on the South Coast

It is now six months since logging stopped in NSW forests south of Sydney. This was because the Forestry Corporation was unable to meet the post-bushfire environmental standards set by the Environment Protection Authority (EPA). The site-specific regulations imposed after the Black Summer bushfires made what could be logged within the new legislation unviable.

Following the tragedy of last summer’s wildfires, on the back of many years of severe drought, when 80 per cent of South Coast forests were devastated by fire, the EPA conditions were legislated for a very good reason. The forestry industry exists subject to the Forestry Act 2012, under which the Forestry Corporation is bound to operate in an ecologically sustainable manner to meet the requirements of the act and any relevant Regional Forest Agreements.

Forestry launched into months of negotiation with the EPA attempting to find some middle ground, however one wishes to interpret that. Many forest advocates interpret it as Forestry Corp attempting to weaken the conditions to allow logging to continue.

The EPA said in a statement that any logging by Forestry Corp is still bound by the bushfire regulations and the conditions imposed by them at the beginning of 2020.

Last Monday, Forestry Corporation revealed it will resume logging on the South Coast. On Monday, locals reported logging activities had already commenced in Nadgee State Forest, south of Eden near the Victorian border – a spot more isolated than nearly anywhere else on the South Coast.

Forestry appears to be working unilaterally, without these site-specific conditions, and in its media release said it will put its own conditions in place which it believes respect the damaged condition of the forests it wishes to log. Unfortunately the EPA is not privy to these conditions and holds concerns as to how it will be able to monitor the activity.

“It is almost as if they have sidelined the regulator and are calling their bluff” long-time forest advocate Nick Hopkins told me recently,

“Perhaps to test out how serious the EPA is. The EPA has retaliated that as soon as any illegal forestry activity commences they will move in with a stop work order (SWO) in place.”

It is a very volatile situation. Until Monday, when a breach report was submitted to the EPA by a concerned local, the regulatory body may not have even been aware that activity had begun in Nadgee.

The same morning Harriet Swift called into ABC South East radio and blew the whistle on the resumption of logging. The ABC as usual acted promptly, getting Forestry Corp onto the program who confirmed the Nadgee activity and also said they were about to move into Mogo and Shallow Crossing compartments near the Clyde River.

The community is watching and is extremely concerned.

The peak environment group, South East Region Conservation Alliance (SERCA) has asked the Minister for the Environment, Matt Kean, to intervene to stop the resumption of logging on the South Coast this week.

Acting in defiance of their own regulator is a bold move by Forestry Corporation. Worse still it appears to have the backing of Deputy Premier and Forestry Minister, John Barilaro.

One forest campaigner who asked not to be named said

“In any other industry you would call them a rogue operator. If you are acting in defiance of the body that was legislatively set up to regulate your actions then, by definition, you have gone rogue.”

If the EPA doesn’t take action it leaves the community with no other option but to take the matter into their own hands.

While logging resumed in Nadgee State Forest (Cpt 95A) south of Eden on Monday, other operations approved for Yambulla and Timbillica/ East Boyd are likely to start at any time.

“It is obvious from recent information provided to Budget Estimates Committees that the logging industry was finding it financially non-viable to log under the stricter rules and had decided to ignore the EPA and proceed with logging regardless.”

“To resume logging now, especially under approvals substantially unchanged since before the bushfires, is reckless and irresponsible,” according to Ms Swift.

The Nadgee area is also a known habitat for the critically endangered Swift Parrot which migrates there from Tasmania each year. Following the bushfires it’s estimated that less than 300 Swift Parrots survived and face certain extinction if native forest logging continues.

“Any bushfire survivors among these species will have no hope if this logging goes ahead.”

Ms Swift said that scientific advice tells us that any burnt forests which are now logged will take possibly 200 years to recover, if ever.

“To risk the very existence of these forest ecosystems for a few boatloads of cheap export woodchips is greedy and short sighted” Ms Swift added. “Wood chipping is massively subsidised by taxpayers and it’s time our governments and the industry recognised that native forest wood chipping has no future.”

“Completing the transition of the industry from native forests to plantation wood could be done quickly and with minimal dislocation, and with economic as well as environmental benefits to the community.”

Twice last year the EPA slapped stop work orders on Forestry after the community reported what appeared to be illegal logging activity. EPA responded, stopping the illegal logging in South Brooman and Mogo.

Independent MP Justin Field has taken this forestry stalemate to State Parliament. Mr Field urged the EPA to call the bluff of Forestry and Barilaro and take legal action or issue a SWO to stop the decimation of these forests. He also urged Matt Kean and the Premier to speak to John Barilaro and remind him that Forestry Corporation is bound to the Forestry Act and to protections of the environment for future generations.

“If Forestry Corporation won’t protect these forests, if EPA can’t or won’t act, then I know that the community will” Mr Field said on Thursday.

The community is understandably outraged by Forestry Corporation re-starting logging on the South Coast under inadequate pre-fire logging rules which fail to protect burnt forests and the species who rely on them. The NSW EPA has warned this action may breach the law in NSW but forestry is pushing ahead anyway.

In condemning Forestry Corp’s actions, Mr Field explains that "Forestry Corporation has been guilty of systemic breaches of logging rules on the South Coast which led to stop work orders and numerous investigations last year. These breaches triggered the agreement to seek an independent assessment of what rules should apply in these burnt areas by the Natural Resources Commission.”

“To start logging while that review is underway is a gross act of bad faith which should be condemned.”

Egregiously, over 85% of the timber that will be taken from these forests is for woodchips. To log our burnt and struggling forests for woodchips is a gross act of environmental vandalism.

Climate change with its signature extreme weather events ranging from drought to fire to flood have put ecological systems in Australia into crisis. Business as usual is off the agenda and may never return. Covid has demonstrated how much and how quickly we are able to adapt when push comes to shove. And blow the cost – we just did it, globally – because we had to. Every person, business and organisation changed and took a hit as necessary, knowing it was for the greater good, and that we were in it together. Forestry, and the way wood is used in Australia and internationally, the entire industry, needs a re-evaluation as to its ongoing viability and, as necessary, a fair and just phase out and transition from the existing jobs and employment centres currently supported by its operation.

Updates just received indicate that in the last week Forestry Corporation have added another five compartments in the Eurobodalla Shire to the status of ‘planning’. A few days ago a harvest plan for compartment 180 in Mogo State Forest was released which includes some critical mountain bike trails that are part of the Mogo adventure trail’s project designed to bring economic recovery to the Shire.

The harvest plan appears to include Forestry Corporation’s own site-specific conditions. Although some steps are being taken to recognise the fire damage, it appears the felling and removal of hollow bearing trees is still permitted. The EPA site-specific conditions quite clearly rule the felling of all hollow bearing trees unlawful after the fires. The New Bush Telegraph contacted Forestry Corporation for comment but did not receive a reply.

Without legal intervention by the EPA, the community will be left little choice but to stand in the way of this destruction. Together we can stop the logging to give the forests and the wildlife that rely on them the fighting chance they need.